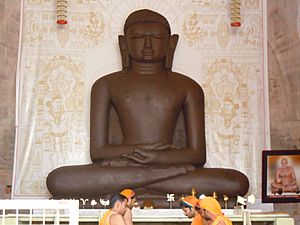 In Jainism, a tirthankara (Sanskrit tīrthaṅkara) is an all knowing Teaching God who teaches the path to liberation from the cycle of births and deaths, called saṃsāra. According to Jains, over time, Jain teachings are gradually forgotten. Then, a rare individual is born who at some point in his life renounces the world to conquer the saṃsāra, the cycle of death and rebirth, on his own. After Tirthankara attains Kevala Jnana (omniscience) he refounds Jainism. Tirthankara provides a bridge for others to follow him from saṃsāra (worldy existence) to moksha (liberation).

According to Jains, exactly twenty-four tirthankaras grace this part of the universe in each half of the Jain time cycle. The first tirthankara was Rishabhanatha, who is said to have taught men various arts and professions including agriculture. The 24th and last tirthankara of present half-cycle was Mahavira (599-527 BC). His predecessor, Parshvanatha, the twenty-third tirthankara was a historical figure.

The teachings tirthankara are compiled as scriptures called Agamas. All tirthankaras teach same philosophy and ethics and their teachings do not contradict. While tirthankaras are worshiped by Jains, there grace is said to be available for all living beings, regardless of religious orientation.

Tirthankaras are called Jina (victor), which means one who has conquered inner enemies such as anger, attachment, pride and greed. They are entirely free of all passions, and personal likes and dislikes. After attaining omniscience, they are free from eighteen imperfections like hunger, thirst, sleep etc.

The tīrthaṅkara nama-karma, a special type of karma is mentioned in the Jain texts. Bondage of this karma raises a soul to the supreme status of a Tīrthaṅkara. Tattvartha Sutra, a major Jain text, list down sixteen observances which lead to the influx of this karma- 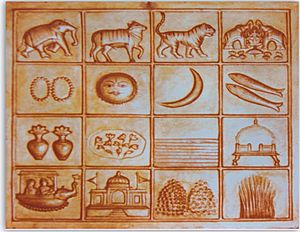 Auspicious dreams seen by a tirthankara's mother during pregnancy

Five auspicious events called, Pañca kalyāṇaka happen in the life of every tirthankara: 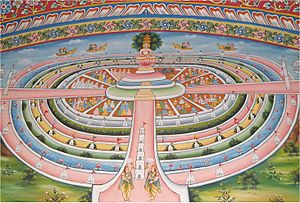 After attaining omniscience, a tirthankara preaches the path to liberation in the samavasarana. According to Jain texts, the heavenly pavilion is erected by devas (heavenly beings) where devas, humans and animals assemble to hear the tirthankara. A tirthankara's speech is listened by all humans and animals in their own language. It is believed that during this speech, there is no unhappiness for miles around the site.

Jainism teaches that time has no beginning or end. It moves like the wheel of a cart. Jains divide the time cycle in two halves, Utsarpiṇī or ascending time cycle and avasarpiṇī, the descending time cycle. 24 tirthankaras are born in each half of this cycle. In Jain tradition the tirthankaras were royal in their final lives, and Jain texts record details of their previous lives. 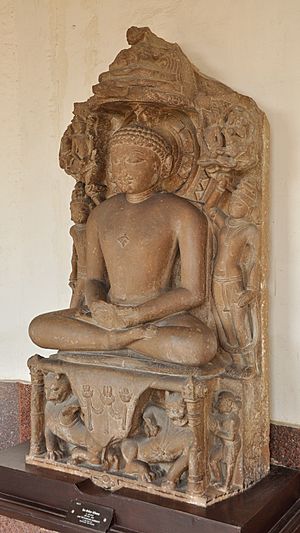 In chronological order, the names, emblems and colours of the 24 tirthankaras of this age are mentioned below: Dhanuṣa means "bow" and hatha means "hands".

All content from Kiddle encyclopedia articles (including the article images and facts) can be freely used under Attribution-ShareAlike license, unless stated otherwise. Cite this article:
Tirthankara Facts for Kids. Kiddle Encyclopedia.