Falcons are small birds of prey and are related to hawks and eagles. They usually have pointed wings and long tails.

Most falcons eat small mammals that they hunt using eyesight, although some species hunt other birds, which they take in flight. Like hawks, most falcons have dark gray or brown backs and wings, with white undersides.

Adult falcons have thin, tapered wings, which enable them to fly at high speed and change direction rapidly. Fledgling falcons, in their first year of flying, have longer flight feathers, which make their configuration more like that of a general-purpose bird such as a broadwing. This makes flying easier while learning the exceptional skills required to be effective hunters as adults. 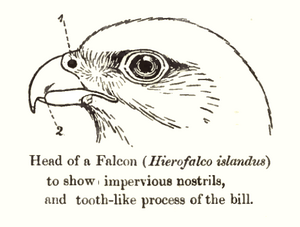 The falcons are the largest genus in the Falconinae subfamily of Falconidae, which itself also includes another subfamily comprising caracaras and a few other species. All these birds kill with their beaks, using a "tooth" on the side of their beaks—unlike the hawks, eagles, and other birds of prey in the Accipitridae, which use their feet.

The largest falcon is the gyrfalcon at up to 65 cm in length. The smallest falcons are the kestrels, of which the Seychelles kestrel measures just 25 cm. As with hawks and owls, falcons exhibit sexual dimorphism, with the females typically larger than the males, thus allowing a wider range of prey species. 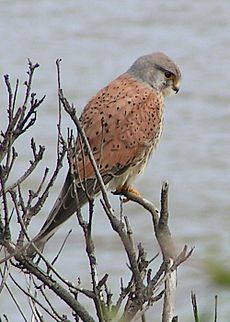 Some small falcons with long, narrow wings are called "hobbies" and some which hover while hunting are called "kestrels".

As is the case with many birds of prey, falcons have exceptional powers of vision; the visual acuity of one species has been measured at 2.6 times that of a normal human. Peregrine falcons have been recorded diving at speeds of 200 miles per hour (320 km/h), making them the fastest-moving creatures on Earth.

The peregrine falcon is found over most of the world and is famous for hunting birds by diving down on them at 320 km/h (200 mi/h). It was nearly wiped out in North America by the use of pesticides, but has since made a recovery.

In some countries falcons are used in falconry. This means people catch the birds and make them hunt for them. Long ago this was a way for people to get more food but today it is a sport.

On the Moroccan island of Mogador, falcons seem to imprison small birds by trapping them in crevasses, presumably saving them to eat later.

Mogador has the ruins of a fortress, a mosque and a prison. Today the island is a nature reserve, where Eleonora’s falcons nest among the ruins. They hunt migrating warblers, hoopoes and other birds. Researchers came across small birds trapped in deep cavities, their flight and tail feathers removed. The birds were unable to move their wings or use their dangling legs.

Eleonora’s falcons have been seen building up larders of up to 20 dead birds during migration season, when prey is plentiful. But "storing snacks that are still alive could be a unique behaviour" said an expert.

All content from Kiddle encyclopedia articles (including the article images and facts) can be freely used under Attribution-ShareAlike license, unless stated otherwise. Cite this article:
Falcon Facts for Kids. Kiddle Encyclopedia.