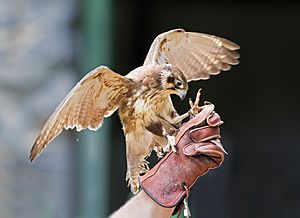 A brown falcon used for falconry in Tasmania

The brown falcon (Falco berigora) is a relatively large falcon native to Australia and New Guinea.

A number of plumage morphs occur, with the primary distinction being between the pale morph and the dark morph. Both morphs usually have dark brown upper parts and wing coverts. Dark morph birds have predominantly dark under parts, although some light streaking is common. Pale morph birds have white underparts that are varyingly streaked with brown, sometimes heavily so. Pale individuals may also have prominently white under tail coverts and these may be diagnostic.

Adults are usually 40 to 50 cm (16 to 20 in) long. They are found in light and dark forms and a variety of intermediates. Animals typically have red-brown heads with narrow black streaks with a light crown and off-white chin. Wings are a spotted red-brown with dark brown quills. Beaks are light blue/grey; eyes are brown. The falcons make a loud cackle call uttered frequently.

Brown falcons breed from June to November, usually in an old nest of a larger passerine or another hawk species; they occasionally nest in hollow limbs of trees. The brown falcon lays between two and five eggs that have red and brown spots and blotches.

The brown falcon eats small mammals, including house mice. They also eat young rabbits in the summer. It also eats small birds, lizards, snakes, and a variety of invertebrates, particularly caterpillars, grasshoppers, crickets, and beetles. Insects form the bulk of the animals' diets during winter and the falcons often chase the insects on the ground.

All content from Kiddle encyclopedia articles (including the article images and facts) can be freely used under Attribution-ShareAlike license, unless stated otherwise. Cite this article:
Brown falcon Facts for Kids. Kiddle Encyclopedia.