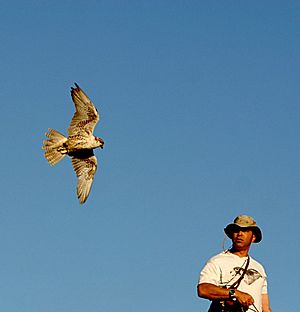 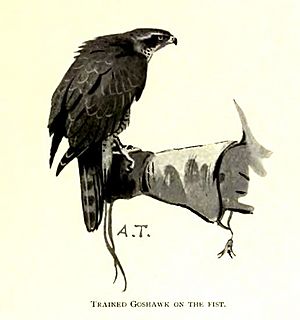 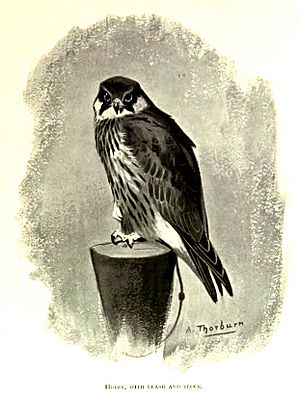 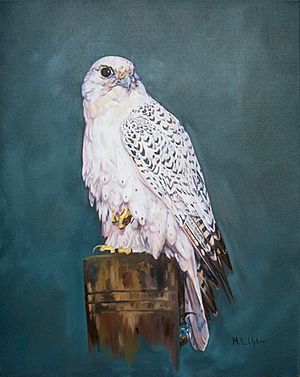 Falconry or hawking is an art or sport which involves the use of trained raptors (birds of prey) to hunt or pursue game for humans. There are two traditional terms used to describe a person involved in falconry: a falconer flies a falcon; an austringer flies a hawk (accipiter). In modern falconry the Red-tailed Hawk (Buteo jamaicensis) and the Harris hawk are often used. The words "hawking" and "hawker" have become used so much to mean petty traveling traders, that the terms "falconer" and "falconry" now apply to all use of trained birds of prey to catch game. 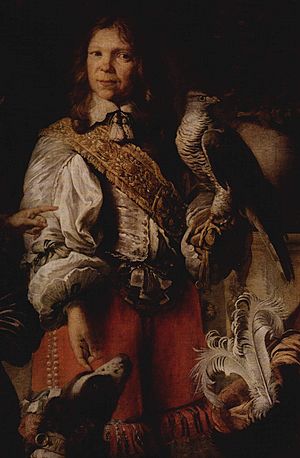 Some views of falconry state that the art started in Mesopotamia, but some say that it started in the Far East. The earliest evidence comes from around the reign of Sargon II (722-705 BC). Falconry was probably introduced to Europe around AD 400, when the Huns and Alans invaded from the East. Frederick II of Hohenstaufen has been noted as one of the early European noblemen to take an interest in falconry. He is believed to have obtained firsthand knowledge of Arabic falconry during wars in the region (between June 1228–June 1229). He obtained a copy of Moamyn's manual on falconry and had it translated into Latin by Theodore of Antioch. Frederick II himself made corrections to the translation in 1241 resulting in De Scientia Venandi per Aves.

Historically, falconry was a popular sport and status symbol among the nobles of medieval Europe and feudal Japan; in Japan the sport is called takagari. Eggs and chicks of birds of prey were quite rare and expensive, and because the process of raising and training a hawk or falcon requires a great deal of time, money, and space, it was largely restricted to the noble classes. In Japan, there were even strict restrictions on who could hunt which sorts of animals and where, based on rank within the samurai class. In art and in other aspects of culture such as literature, falconry remained a status symbol long after it was no longer popularly practiced. Eagles and hawks displayed on the wall could represent the noble himself, metaphorically, as noble and fierce. Woodblock prints or paintings of falcons or falconry scenes could be bought by wealthy commoners, and displayed as the next best thing to partaking in the sport, again representing a certain degree of nobility.

There are several categories of raptor that could possibly be used in falconry. They are also classed by falconers as:

The Osprey is a medium-large bird with a worldwide distribution that specializes in eating fish. Generally speaking, it does not lend itself to falconry. However, the possibility of using a falcon to catch fish remains intriguing. (Some references to "ospreys" in old records mean a mechanical fish-catching device and not the bird.)

Most species of genus Haliaëtus catch and eat fish, some almost exclusively. However, in countries where they are not protected, some have been effectively used in hunting for ground quarry. 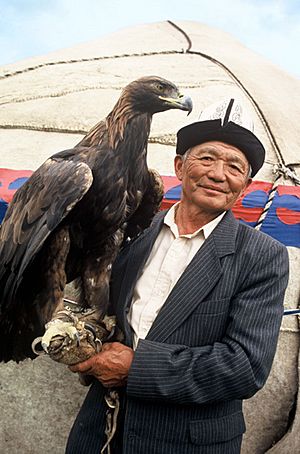 The Aquila genus has a nearly worldwide distribution. The more powerful types are used in falconry; for example Golden Eagles have reportedly been used to hunt wolves in Kazakhstan, and are now used by the Kazakh eagle hunters to hunt foxes and other large prey, as they are in neighbouring Kyrgyzstan. Most are primarily ground-oriented but will occasionally take birds. Eagles are not used as widely in falconry as other birds of prey, due to the lack of versatility in the larger species (they primarily hunt over large open ground), the greater potential danger to other people if hunted in a widely populated area, and the difficulty of training and managing an eagle.

The genus Buteo, known as hawks in North America and not to be confused with vultures, has worldwide distribution but is particularly well represented in North America. The Red-tailed Hawk, Ferruginous Hawk, and rarely, the Red-shouldered Hawk are all examples of species from this genus that are used in falconry today. The Red-tailed Hawk is hardy and versatile, taking rabbits, hares, and squirrels; given the right conditions it can catch geese, ducks, pheasants, and even wild turkeys. The Red-Tailed Hawk is also considered a good bird for beginners. The Eurasian or Common Buzzard is also used, although this species requires more perseverance if rabbits are to be hunted. 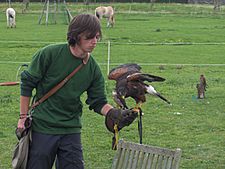 Parabuteo unicinctus is the sole representative of this genus worldwide. Arguably the best rabbit or hare raptor available anywhere, the Harris' Hawk is also adept at catching birds. Often captive-bred, the Harris's Hawk is remarkably popular because of its temperament and ability. They are gregarious birds, one of the few semi-social raptors. Harris's can hunt in groups, a behavior that is a trademark in the wild. This genus is native to the Americas from southern Texas and Arizona to northern South America.

The genus Accipiter is also found worldwide. The hawk expert Mike McDermott once said, "The attack of the accipiters is extremely swift, rapid and violent in every way." They are well known in falconry use both in Europe and North America. The goshawk has been trained for falconry for hundreds of years, taking a variety of birds and mammals.

The genus Falco is found worldwide. Much falconry is concerned with species of this group of birds. Most falcons are oriented towards birds as prey, the Peregrine Falcon almost exclusively so.

Owls are not closely related to hawks or falcons. There is little written in classic falconry that discusses the use of Owls in falconry. However, there are at least two species that have successfully been used, the Eurasian Eagle Owl and the Great Horned Owl. Successful training of owls is much different from the training of hawks and falcons, as they are hearing- rather than sight-oriented (owls can only see black and white, and are long-sighted). This often leads falconers to believe that they are less intelligent, as they are distracted easily by new or unnatural noises and they don't respond as readily to food cues. However, if trained successfully, owls show intelligence on the same level as that of hawks and falcons.

All content from Kiddle encyclopedia articles (including the article images and facts) can be freely used under Attribution-ShareAlike license, unless stated otherwise. Cite this article:
Falconry Facts for Kids. Kiddle Encyclopedia.