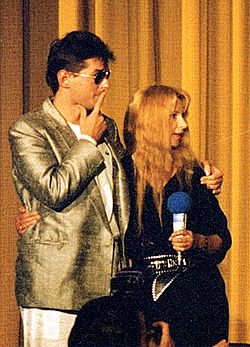 Falco (born February 19, 1957 in Vienna, Austria as Johann (Hans) Hölzel, and died on February 6, 1998 in Puerto Plata, Dominican Republic) was an Austrian pop singer. His breakthrough was "Der Kommissar", which beat top positions in international charts. This song and his first two albums were produced by Robert Ponger.

His song Rock me Amadeus has been the one and only German-speaking song reaching no.1 on the US charts. From 1985 to 1988 he produced 3 albums with the Dutch Production Team Bolland & Bolland. "Falco 3" became his most successful record reaching number 3 of the US Longplay Charts.

Unsuccessful albums like "Data de Groove" (produced by Ponger again) followed. In 1988 he married Isabella Vitkovic, one year later, in 1989, they separated. Ponger and the Bollands produced all of the albums that were released in his lifetime. To stay tuned Falco recorded many techno songs and worked with different producers for his last album.

His successful album "Out of the dark (into the light)" was released after Falco's death in a road accident.

All content from Kiddle encyclopedia articles (including the article images and facts) can be freely used under Attribution-ShareAlike license, unless stated otherwise. Cite this article:
Falco Facts for Kids. Kiddle Encyclopedia.