Harris's hawk (Parabuteo unicinctus), formerly known as the bay-winged hawk or dusky hawk, and known in Latin America as peuco, is a medium-large bird of prey that breeds from the southwestern United States south to Chile, central Argentina, and Brazil. Birds are sometimes reported at large in Western Europe, especially Britain, but it is a popular species in falconry and these records almost certainly all refer to escapes from captivity.

The name is derived from the Greek para, meaning beside, near or like, and the Latin buteo, referring to a kind of buzzard; uni meaning once; and cinctus meaning girdled, referring to the white band at the tip of the tail. John James Audubon gave this bird its English name in honor of his ornithological companion, financial supporter, and friend Edward Harris.

The Harris's hawk is notable for its behavior of hunting cooperatively in packs consisting of tolerant groups, while other raptors often hunt alone. Harris hawks' social nature has been attributed to their intelligence, which makes them easy to train and have made them a popular bird for use in falconry. 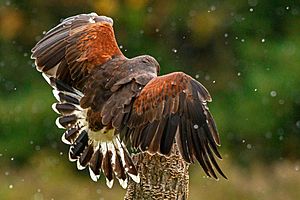 This medium-large hawk is roughly intermediate in size between a peregrine falcon (Falco peregrinus) and a red-tailed hawk (Buteo jamaicensis). Harris's hawks range in length from 46 to 59 cm (18 to 23 in) and generally have a wingspan of about 103 to 120 cm (41 to 47 in) These hawks have a brownish plumage, reddish shoulders and tail feathers with a white base and white tip. 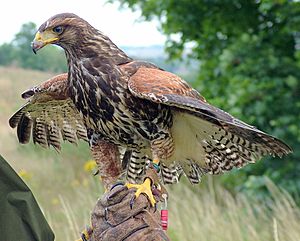 Juvenile in a falconry demonstration

The juvenile Harris's hawk is mostly streaked with buff, and appears much lighter than the dark adults. When in flight, the undersides of the juveniles' wings are buff-colored with brown streaking. They can look unlike adults at first glance, but the identical chestnut plumage is an aid for identification.

There are three subspecies of Harris's hawk:

Harris's hawks live in sparse woodland and semi-desert, as well as marshes (with some trees) in some parts of their range (Howell and Webb 1995), including mangrove swamps, as in parts of their South American range. Harris's hawks are permanent residents and do not migrate. Important perches and nest supports are provided by scattered larger trees or other features (e.g., power poles, woodland edges, standing dead trees, live trees, and boulders, and saguaros).

The wild Harris's hawk population is declining due to habitat loss; however, under some circumstances, they have been known to move into developed areas. 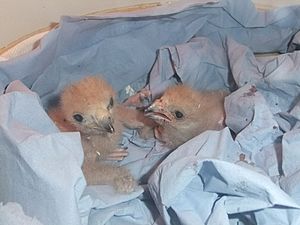 At one week of age

This species occurs in relatively stable groups. A dominance hierarchy occurs in Harris's hawks, wherein the mature female is the dominant bird, followed by the adult male and then the young of previous years. Groups typically include from 2 to 7 birds. Not only do birds cooperate in hunting, they also assist in the nesting process. No other bird of prey is known to hunt in groups as routinely as this species. 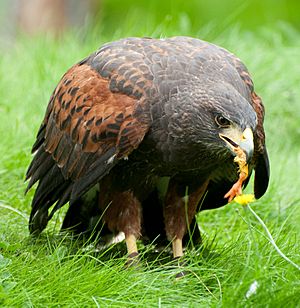 The diet of the Harris's hawk consists of small creatures including birds, lizards, mammals, and large insects. Because it often hunts in groups, the Harris's hawk can also take down larger prey. Although not particularly common, the Harris's hawk may take prey weighing over 2 kg (4.4 lb), such as adult jackrabbits, great blue heron (Ardea herodias) and half-grown wild turkeys (Meleagris gallapavo). The desert cottontail (Syvilagus auduboni), the leading prey species in the north of the Harris's hawk range, usually weighs 800 g (1.8 lb) or less. Undoubtedly because it pursues large prey often, this hawk has larger and stronger feet, with long talons, and a larger, more prominent hooked beak than most other raptors around its size. Locally, other buteonine hawks, including the ferruginous hawk, the red-tailed hawk and the white-tailed hawk also hunt primarily cottontails and jackrabbits, but each are bigger, weighing about 500 g (18 oz), 300 g (11 oz) and 200 g (7.1 oz), respectively, more on average than a Harris's hawk. 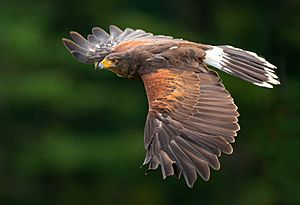 Harris's hawk in flight at a falconry centre

While most raptors are solitary, only coming together for breeding and migration, Harris's hawks will hunt in cooperative groups of two to six. This is believed to be an adaptation to the lack of prey in the desert climate in which they live. In one hunting technique, a small group flies ahead and scouts, then another group member flies ahead and scouts, and this continues until prey is bagged and shared. In another, all the hawks spread around the prey and one bird flushes it out. Groups of Harris's hawks tend to be more successful at capturing prey than lone hawks, with groups of two to four individuals having ~10% higher success rates per extra individual.

They nest in small trees, shrubby growth, or cacti. The nests are often compact, made of sticks, plant roots, and stems, and are often lined with leaves, moss, bark and plant roots. They are built mainly by the female. There are usually two to four white to blueish white eggs sometimes with a speckling of pale brown or gray. The nestlings start out light buff, but in five to six days turn a rich brown.

Very often, there will be three hawks attending one nest: two males and one female. Whether or not this is polyandry is debated, as it may be confused with backstanding (one bird standing on another's back). The female does most of the incubation. The eggs hatch in 31 to 36 days. The young begin to explore outside the nest at 38 days, and fledge, or start to fly, at 45 to 50 days. The female sometimes breeds two or three times in a year. Young may stay with their parents for up to three years, helping to raise later broods. Nests are known to be predated by coyotes (Canis latrans), golden eagles (Aquila chrysaetos), red-tailed hawks (Buteo jamaicensis), great horned owls (Bubo virginianus) and flocks of common ravens (Corvus corax), predators possibly too formidable to be fully displaced by the Harris's hawk's cooperative nest defenses. No accounts show predation on adults in the United States and the Harris's hawk may be considered an apex predator, although presumably predators like eagles and great horned owls would be capable of killing them. In Chile, black-chested buzzard-eagles (Geranoaetus melanoleucus) are likely predators. 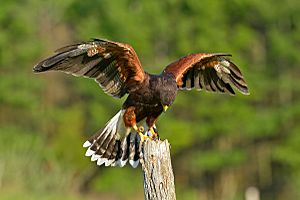 Since about 1980, Harris's hawks have been increasingly used in falconry and are now the most popular hawks in the West (outside of Asia) for that purpose, as they are one of the easiest to train and the most social.

Trained Harris's hawks have been used to remove an unwanted pigeon population from London's Trafalgar Square, and from the tennis courts at Wimbledon.

Trained Harris hawks have been used for bird abatement by falconers in the United States at various locations including resorts and industrial sites.

John James Audubon illustrated the Harris's hawk in The Birds of America (published, London 1827–38) as Plate 392 with the title "Louisiana Hawk -Buteo harrisi". The image was engraved and colored by the Robert Havell, London workshops in 1837. The original watercolor by Audubon was purchased by the New York History Society where it remains to this day (January 2009).

All content from Kiddle encyclopedia articles (including the article images and facts) can be freely used under Attribution-ShareAlike license, unless stated otherwise. Cite this article:
Harris's hawk Facts for Kids. Kiddle Encyclopedia.