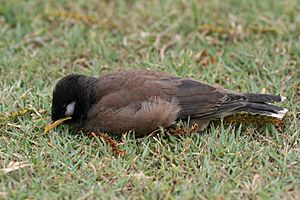 A Common Myna fledgling rests on a lawn below its nest.

Fledge is the stage in a young bird's life when the feathers and wing muscles become developed enough for flight. It also describes the act of a chick's parents raising it until it is fully grown. A young bird that has recently fledged but still needs care and feeding is called a fledgling.

In ornithology, fledging has many meanings, depending on species. Birds are sometimes considered fledged once they leave the nest, even if they still cannot fly.

All content from Kiddle encyclopedia articles (including the article images and facts) can be freely used under Attribution-ShareAlike license, unless stated otherwise. Cite this article:
Fledge Facts for Kids. Kiddle Encyclopedia.