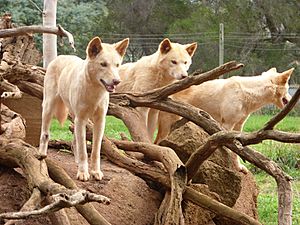 A pack hunter or social predator is a predator belonging to the animal kingdom, which has evolved to hunt its prey by working together with other members of its species. Normally animals hunting in this way are closely related. Except where only males normally hunt (humans and chimpanzees), all individuals in a family group will contribute to hunting. The most commonly known pack hunter is the gray wolf.

The wolf is the closest wild relative of all breeds of domesticated dog. Humans and their closest-living relatives chimpanzees are also pack hunters.

Other pack hunting mammals include dolphins, lions and spotted hyenas. A number of avian social predators exist. These include the Harris's hawk, butcherbirds, three of four kookaburra species and many helmetshrikes. There are a few cold-blooded pack hunters, forexample, simple arthropods such as army ants. Another example is the yellow saddle goatfish Occasionally crocodiles are pack hunters. Hunting in packs allows smaller predators to hunt larger prey.

All content from Kiddle encyclopedia articles (including the article images and facts) can be freely used under Attribution-ShareAlike license, unless stated otherwise. Cite this article:
Pack hunter Facts for Kids. Kiddle Encyclopedia.