The spotted hyena (Crocuta crocuta) also known as laughing hyena, is a carnivorous mammal of the family Hyaenidae, of which it is the largest extant member. Though the species' prehistoric range included Eurasia extending from Atlantic Europe to China, it now only occurs in all of Africa south of the Sahara save for the Congo Basin. Spotted hyenas live in large matriarchal communities called clans, which can consist of up to 80 individuals.

Though often mislabeled as cowardly scavengers, spotted hyenas derive the majority of their nourishment by hunting medium sized ungulates, and frequently clash with lions over food and territory. They are highly intelligent among the carnivora, with studies indicating that their social intelligence is on par with some primate species.

The spotted hyena features prominently in African mythology and folklore, where its portrayal varies from being a bringer of light, to a symbol of immorality and depravity. 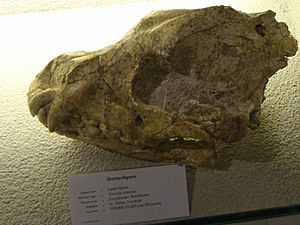 It is thought that the ancestors of the spotted hyena branched off from the true hyenas (striped and brown hyenas) during the Pliocene era, 5.332 million to 1.806 million years ago. 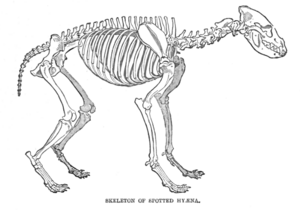 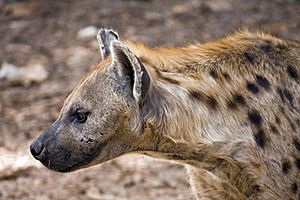 Spotted hyenas are the largest of extant hyenas. Their fur is shorter than those of striped hyenas, and their manes less full. Spotted hyenas have powerful forequarters and necks which rival those of leopards, though comparatively small hindquarters. The rump is rounded rather than angular, which prevents attackers chasing from behind getting a firm grip on it. Female spotted hyenas are considerably larger than males, weighing 12% more. Adults measure 95.0—165.8 cm in body length, and have a shoulder height of 70.0-91.5 cm. Adult male spotted hyenas in the Serengeti weigh 40.5—55.0 kg (89—121 lb), while females weigh 44.5—63.9 kg (98—141 lb). Spotted hyenas in Zambia tend to be heavier, with males weighing on average 67.6 kg (149 lb), and females 69.2 kg (153 lb). Macdonald (1992) gives a maximum weight of 81.7 kg (180 lb), while Kingdon (1977) gives one of 86 kg (190 lb). The skulls of Zambian hyenas are also 7% longer and wider than those of Serengeti populations. It has been estimated that adult members of the now extinct Eurasian populations weighed 102 kg (225 lbs).

An experiment in 1955 demonstrated how the jaws of spotted hyenas outmatch those of brown bears in bonecrushing ability, and free ranging hyenas have been observed to crack open the long bones of giraffes measuring 7 cm in diameter. Although once thought to have the most powerful jaws among extant carnivorous mammals, other animals such as the Tasmanian Devil have been proven to have even stronger bites.

Spotted hyenas have powerful night vision, which allows them to recognise each other in complete darkness, even if they are downwind.

Spotted hyenas will rest and give birth in dens, which they rarely dig themselves: they will often use the abandoned lairs of warthogs, springhares and jackals. A single den can house several females and dozens of cubs at once. Unlike grey wolves, it is not uncommon for spotted hyenas to accommodate cubs of different litters in one den. Spotted hyenas will sometimes live in close proximity to warthogs, sharing mud holes and sleeping within a few metres of each other. Spotted hyenas may sleep in the open if the weather is not too hot, but otherwise they will rest near lakes, streams or in mud or dense shrubs. Unlike most social carnivores, spotted hyenas still display some atavistic behaviours of their solitary ancestors: spotted hyenas still head out for food alone, but later return to their community.

Spotted hyenas are more social than grey wolves, but their groups are not as closely knit as African wild dogs. Spotted hyena societies are more complex than those of other carnivorous mammals, and have been reported to be remarkably similar to those of cercopithecine primates in respect to group size, structure, competition and cooperation. Like primates, spotted hyenas use multiple sensory modalities, recognise individual conspecifics, are conscious that some clan-mates may be more reliable than others, recognise 3rd party kin and rank relationships among clan-mates, and adaptively use this knowledge during social decision making. Also, like cercopithecine primates, dominance ranks in hyena societies are not correlated with size or aggression, but with ally networks. Group size is variable; a "clan" of spotted hyenas can include 5–90 members and is led by a single alpha female called the matriarch. 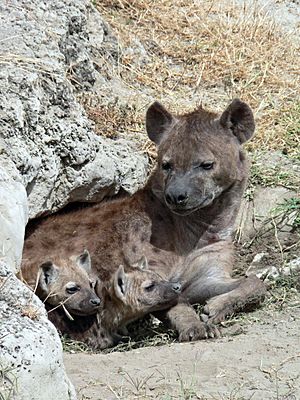 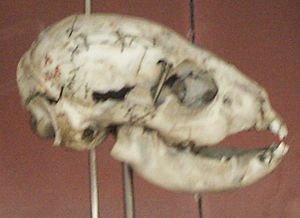 Spotted hyenas are not seasonal breeders, and can reproduce at any time of the year, though a birth peak does occur during the wet season. The average litter consists of two cubs, with three occasionally being reported. Males take no part in the raising of young. The length of the gestation period tends to vary greatly, though 110 days is the average length of time.

The cubs are born with soft, brownish black hair, and weigh on average 1.5 kg. Unique among carnivorous mammals, spotted hyenas are also born with their eyes open and with 6–7 mm long canine teeth and 4 mm long incisors. Also, cubs will attack each other from the moment they are born. This is particularly apparent in same sexed litters, and can result in the death of the weaker cub. Females are very protective of their cubs, and will not tolerate other adults, particularly males, approaching them.

Spotted hyenas exhibit adult behaviours very early in life: cubs have been observed to ritually sniff each other and mark their living space before the age of one month. Within ten days of birth, they are able to move at considerable speed. Cubs begin to lose the black coat and develop the spotted, lighter coloured pelage of the adults at two-three months. They begin to exhibit hunting behaviours at the age of eight months, and will begin fully participating in group hunts after their first year.

Lactating females can carry 3–4 kg (6.5-9 lb) of milk in their udders. Spotted hyena milk is very rich, having the highest protein content (14.9%) of any terrestrial carnivore. The fat content (14.1%) is second only to the polar bear, so unlike lions and wild dogs, they can leave their cubs for about a week without feeding them. Cubs will nurse from their mother for 12 or 16 months, though they can process solid food as early as three months.

The average lifespan in zoos is 12 years, with a maximum of 25 years. 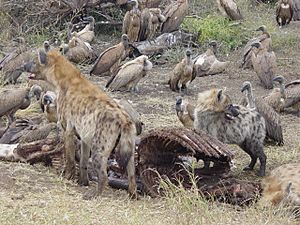 Spotted hyenas are better equipped for scavenging than other African predators: not only are they able to splinter and eat the largest ungulate bones, they are also able to digest them completely. Spotted hyenas can digest all organic components in bones, not just the marrow. Any inorganic material is excreted with the faeces, which consist almost entirely of a white powder with few hairs. They react to alighting vultures more readily than other African carnivores, and are more likely to stay in the vicinity of lion kills or human settlements. Wildebeest are the most commonly taken medium sized ungulate prey item in both Ngorongoro and the Serengeti, with zebra and Thomson's gazelles coming close behind. Cape buffalo are rarely attacked due to differences in habitat preference, though adult bulls have been recorded to be taken on occasion. Spotted hyenas have also been found to catch fish, tortoises, humans, black rhino, hippo calves, young African elephants, pangolins, pythons, and a large number of different ungulate species. The fossil record indicates that Eurasian Spotted hyenas in what is now the Czech Republic primarily fed on Przewalski's Horses. Other prey included woolly rhinoceros, Reindeer, Steppe Wisent, Irish elk, chamois and ibex. In Italy, their prey consisted of red deer, aurochs, horses, roe deer, fallow deer, wild boar and ibex. Spotted hyenas are thought to be responsible for the dis-articulation and destruction of some cave bear skeletons. Such large carcasses were an optimal food resource for the hyenas, especially at the end of winter, when food was scarce. However, they were less successful than cave lions in navigating through cave bear dens, due to their inferior climbing abilities.

A single spotted hyena can eat at least 14.5 kg of meat per meal. Although spotted hyenas act aggressively toward each other when feeding, they compete with each other mostly through speed of eating, rather than by fighting as lions do. When feeding on an intact carcass, spotted hyenas will first consume the meat around the loins and anal region, then open the abdominal cavity and pull out the soft organs. Once the stomach, its wall and contents are consumed, the hyenas will eat the lungs and abdominal and leg muscles. Once the muscles have been eaten, the carcass is disassembled and the hyenas carry off pieces to eat in peace. Spotted hyenas are adept at eating their prey in water: they have been observed to dive under floating carcasses to take bites, then resurface to swallow. A single hyena can take less than two minutes in eating a gazelle fawn, while a group of 35 hyenas can completely consume an adult zebra in 36 minutes. Spotted hyenas do not require much water, and typically only spend 30 seconds drinking. 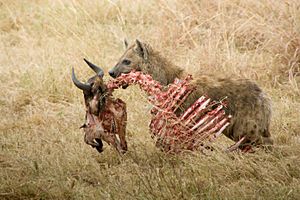 Spotted hyena with a wildebeest skeleton in Karatu, Arusha, Tanzania

Unlike other large African carnivores, spotted hyenas do not preferentially prey on any species, and only buffalo, giraffe and plains zebra are significantly avoided. Spotted hyenas prefer prey with a body mass range of 56–182 kg, with a mode of 102 kg. When hunting medium to large sized prey, spotted hyenas tend to select certain categories of animal: young animals are frequently targeted, as are old ones, though the latter category is not so significant when hunting zebras, due to their aggressive antipredator behaviours. Unlike grey wolves, spotted hyenas rely more on sight than smell when hunting, and do not follow their prey's prints or travel in single file.

Spotted hyenas usually hunt wildebeest either singly, or in groups of two or three. They catch adult wildebeest usually after 5 km chases at speeds of up to 60 km/h. Chases are usually initiated by one hyena, and with the exception of cows with calves, there is little active defense by the wildebeest herd. Wildebeest will sometimes attempt to escape hyenas by taking to water, though in such cases, the hyenas almost invariably catch them. Zebras require different hunting methods to those used for wildebeest, due to their habit of running in tight groups and aggressive defence from stallions. Hyenas seem to plan on hunting zebras in advance, as they tend to indulge in activities such as scent marking before setting off, a behaviour which does not occur when they target other prey species. Typical zebra hunting groups consist of 10-25 hyenas. During a chase, zebras typically move in tight bunches, with the hyenas pursuing behind in a crescent formation. Chases are usually relatively slow, with an average speed of 15–30 km/h. A stallion will attempt to place itself between the hyenas and the herd, though once a zebra falls behind the protective formation it is immediately set upon, usually after a chase of 3 km. Though hyenas may harass the stallion, they usually only concentrate on the herd and attempt to dodge the stallion's assaults. Unlike stallions, mares typically only react aggressively to hyenas when their foals are threatened. Unlike wildebeest, zebras rarely take to water when escaping hyenas. Once prey is caught, spotted hyenas will kill their prey by eating it alive.

Spotted hyenas will increase their kill rate during the calving seasons of their prey, or when they are frequently displaced from their kills by other predators.

All content from Kiddle encyclopedia articles (including the article images and facts) can be freely used under Attribution-ShareAlike license, unless stated otherwise. Cite this article:
Spotted hyena Facts for Kids. Kiddle Encyclopedia.