African elephants are elephants of the genus Loxodonta. The genus consists of two extant species: the African bush elephant, and the smaller African forest elephant. 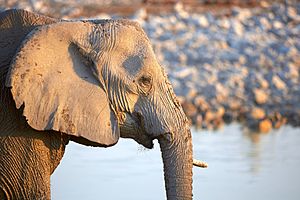 One species of African elephant, the bush elephant, is the largest living terrestrial animal, while the forest elephant is the third-largest. Their thickset bodies rest on stocky legs, and they have concave backs. Their large ears enable them to keep cool.

The upper lip and nose form a trunk. The trunk acts as a fifth limb, a sound amplifier, and an important method of touch. African elephants' trunks end in two opposing lips, whereas the Asian elephant trunk ends in a single lip. 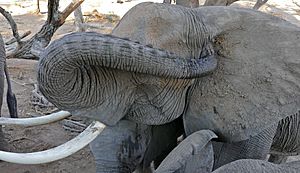 African Elephant using the trunk to scratch the ear 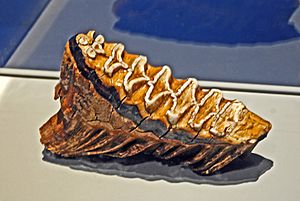 At any one time, elephants have one molar in each jaw bone (two upper, two lower). Each weighs about 11 lbs and measures about 12 inches long. As they wear away at the front, new molars emerge in the back of the mouth and gradually replace the old ones. Elephants replace their teeth six times. If it survives to 60 years of age the elephant no longer has teeth and will die of starvation. 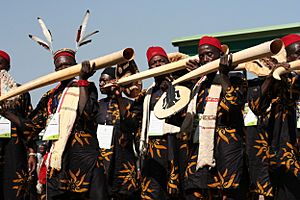 Their tusks are also teeth, the second set of upper incisors become the tusks. They are used for digging for roots and stripping the bark off trees for food, and, fighting each other during mating season, or defending themselves against predators.

They weigh from 50-100 pounds and may be from 5 to 8 feet long. However, a result of poachers killing elephants with the biggest tusks has been a survivor population with much smaller tusks. Both bulls and cows have tusks. 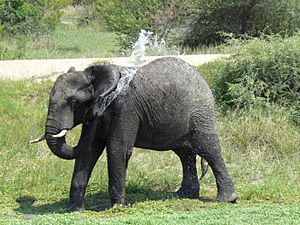 A young elephant taking a shower 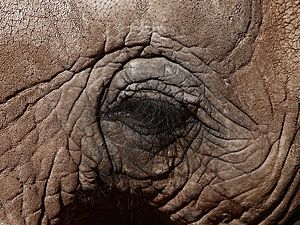 Eye of the African elephant

Bush and forest elephants are nowadays generally considered to be two distinct species. The African forest elephant has a longer and narrower mandible, rounder ears, a different number of toenails, straighter and downward tusks, and considerably smaller size. 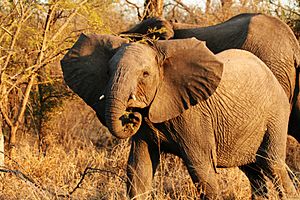 African elephant societies are arranged around family units. Each family unit is made up of around ten closely related females and their calves and is led by an older female known as the matriarch. When separate family units bond, they form kinship or bond groups. After puberty, male elephants tend to form alliances with other males.

Elephants are at their most fertile between the ages of 25 and 45. Calves are born after a gestation period of nearly two years. The calves are cared for by their mother and other young females in the group.

Elephants use some vocalisations that are beyond the hearing range of humans, to communicate across large distances. Elephant mating rituals include the gentle entwining of trunks. 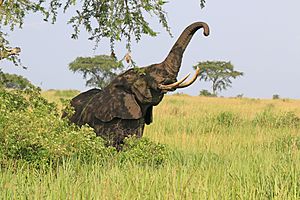 While feeding, elephants use their trunks to pluck at leaves and their tusks to tear at branches, which can cause enormous damage to foliage. A herd may deplete an area of foliage depriving other herbivores for a time.

African elephants may eat up to 450 kg (992 lb) of vegetation per day, although their digestive system is not very efficient; only 40% of this food is properly digested. 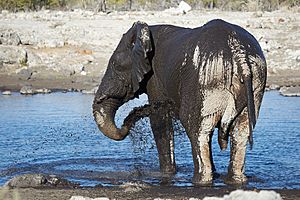 African elephants are highly intelligent, and they have a very large and highly convoluted neocortex, a trait they share with humans, apes and some dolphin species. They are amongst the world's most intelligent species.

With a mass of just over 5 kg (11 lb), elephant brains are larger than those of any other land animal, and although the largest whales have body masses twenty-fold those of a typical elephant, whale brains are barely twice the mass of an elephant's brain. 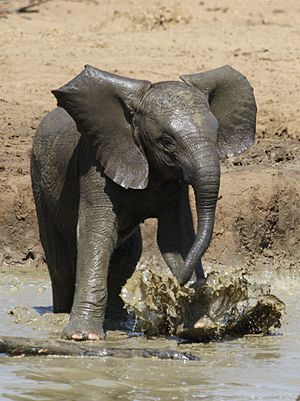 A young elephant at play

The elephant's brain is similar to that of humans in terms of structure and complexity. For example, the elephant's cortex has as many neurons as that of a human brain, suggesting convergent evolution.

Elephants exhibit a wide variety of behaviors, including those associated with grief, learning, allomothering, mimicry, art, play, a sense of humor, altruism, use of tools, compassion, cooperation, self-awareness, memory and possibly language.

All point to a highly intelligent species that is thought to be equal with cetaceans, and primates. 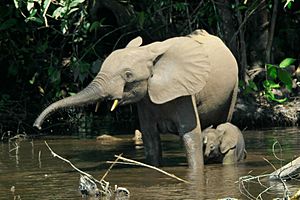 Female African elephants are able to start reproducing at around 10 to 12 years of age, and are in estrus for about 2 to 7 days. They do not mate at a specific time; however, they are less likely to reproduce in times of drought than when water is plentiful. The gestation period of an elephant is 22 months and fertile females usually give birth every 3 – 6 years, so if they live to around 50 years of age, they may produce 7 offspring.

Post sexual maturity, males begin to experience musth, a physical and behavioral condition that is recognised by elevated testosterone and aggression. Musth also serves a purpose of calling attention to the females that they are of good quality, and it cannot be mimicked as certain calls or noises may be. 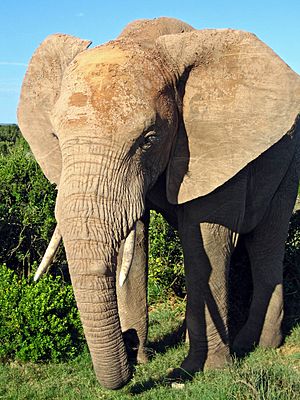 A close-up from the Addo Elephant Park, South Africa

Poaching greatly reduced the population of elephants in Africa in the 20th century. In the eastern region of Chad, elephant herds were substantial as recently as 1970, with an estimated population of 400,000. However, by 2006 the number had dropped to about 10,000. The African elephant nominally has governmental protection, but poaching is a serious issue.

People moving into or near areas where elephants occur naturally is a problem. There is research into methods of safely driving groups of elephants away from humans. Playing recorded sounds of angry honey bees is remarkably effective at prompting elephants to flee an area.

Sometimes elephant communities have grown so large that culling was needed to sustain the ecosystem.

All content from Kiddle encyclopedia articles (including the article images and facts) can be freely used under Attribution-ShareAlike license, unless stated otherwise. Cite this article:
African elephant Facts for Kids. Kiddle Encyclopedia.