Dar es Salaam (Arabic: دار السلام Dār as-Salām) is the largest city in East Africa. It has a population of about 4,360,000 people. The city is also Tanzania's richest city. It is an important economic centre.

The population of Dar es Salaam is increasing at a rate of 4.39% each year. It is the 3rd fastest growing city in Africa and the 9th fastest in the world. The metropolitan area population is expected to reach 5.12 million people by 2020.

This rate is far above the world average. Globally, the growth rate of the human population has been declining since a peak in 1962 and 1963 of 2.20% per annum. In 2009 the estimated annual growth rate was 1.1%.

Dar es Salaam's rapidly expanding population presents both significant challenges and opportunities. Infrastructure development has not kept pace with the population growth so there is significant resource pressure, especially on road networks and the national power grid. However, a sizeable population with a growing middle class continues to attract investment in areas such as retail (shopping malls), entertainment (cinemas) and communication (high speed internet).

Dar es Salaam is located on a large harbour on the Eastern Indian Ocean coast of Africa.

Dar es Salaam has a tropical savanna climate (Aw in the Koeppen climate classification). This is because it is very near the equator and the warm Indian Ocean. The city usually has hot and humid weather during much of the year. Each year the area has two rainy seasons. These are called 'the long rains' (in April and May) and 'the short rains' (in November and December). Nearly 1100mm of rain fall each year on the area. 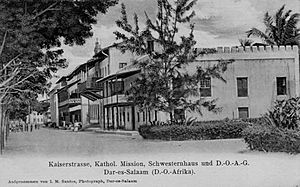 In 1859, Albert Roscher of Germany became the first European to go to Mzizima ("healthy town"). In 1866 Sultan Seyyid Majid of Zanzibar gave it its current name. It is an Arabic phrase meaning Haven of Peace. Dar es Salaam had much growth starting in 1887, when the German East Africa Company created a station there.

The town's growth was because it was the administrative and commercial centre of German East Africa. It was also helped by the growth of industry caused by the Central Railway Line in the early 1900s.

German East Africa was captured by the British during World War I and its name was changed to Tanganyika. Dar es Salaam was still the territory's administrative and commercial centre.

After World War II, Dar es Salaam had a period of rapid growth. Tanganyika became independent from colonial rule in December 1961. Dar es Salaam continued to be its capital. It remained the capital when in 1964 Tanganyika and Zanzibar merged to form Tanzania. However, in 1973, it was decided to move the capital to Dodoma. This has not yet been completed, and Dar es Salaam is still Tanzania's primary city.

All content from Kiddle encyclopedia articles (including the article images and facts) can be freely used under Attribution-ShareAlike license, unless stated otherwise. Cite this article:
Dar es Salaam Facts for Kids. Kiddle Encyclopedia.