The African wild dog or Prairie dog (Lycaon pictus) is a carnivorous (meat-eating) mammal of the Canidae family.

It lives in different areas of Africa.

The African wild dog's scientific name Lycaon pictus comes from the Greek word for "wolf" and the Latin word for "painted."

Adult African wild dogs usually weigh 40-75 pounds (18-34 kilograms). They are tall and lean, measuring about 30 inches (75 centimeters) from the ground to the top of the shoulders. The head and body measure about 39 inches (100 centimeters) and the tail adds another 12-18 inches (30-45 centimeters) to their length. The dogs in southern Africa tend to be larger than those in eastern or western Africa. Males are usually 3-7% larger than females.

African wild dogs have a total of 42 teeth. Their premolars are larger than those of other dogs, which allows them to eat bones easier, much like hyenas.

The African wild dog is the only animal in the canid species that does not have dewclaws, which are located where a thumb would be on a human hand.

Although African wild dogs may reproduce at any time of the year, the times that they mate the most are during the second half of the rainy season, between March and June. Gestation time (the time the mothers carry the pups in their womb) is approximately 70 days. Litters (the number of pups born each time a mother gives birth) can contain 2-19 pups. Usually, mothers give birth every 12-14 months.

Pups are usually born in dens that are dug and then abandoned by other animals. It is usually the males who stay behind to guard the pups while the others, including the mother, go out to hunt. After three months, the pups can leave the den and begin to run with the pack. When they are 8-11 months old, they can kill small animals, but they still depend on the pack kills for most of their food. 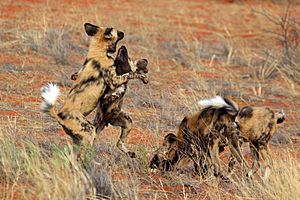 The African wild dog hunts in packs. Like most members of the dog family, they chase their prey in a long, open chase. This kind of hunting, called cursorial hunting, is 80% successful for the dogs. Members of the pack communicate with each other using unusual vocal sounds like chirping or squeaking. This helps them coordinate their movements.

Wild dogs will kill larger prey rapidly, which gives them a ferocious reputation. Typically, the dogs will eat too much so that they can bring food back to the others that are left in the den. They regurgitate meat for the pups, the sick or injured, the old, and those who stayed back to guard the pups. 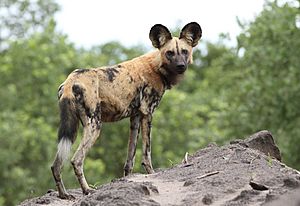 The African wild dogs' prey does vary, but is usually medium-to-large-sized ungulates, like the impala, Thomson's Gazelle, Springbok, kudu, reedbuck, and wildebeest calves. Depending upon the season and availability, they will sometimes hunt large birds as well. Some packs can catch and eat large animals like zebras and warthogs. These packs work together as a team to take down one animal. Some studies suggest that the large-animal-hunting tactic may be learned behavior rather than instinctive behavior.

The African wild dog is endangered by human overpopulation, habitat loss, predator control killing, and disease. Because it hunts in large territories, it has to compete with other animals that prefer the same prey, like lions and the spotted hyena, who are more powerful animals. African wild dogs are also killed by livestock herders and game hunters. Since most of Africa's national parks are too small for wild dogs, the packs expand to unprotected areas, which can be ranch or farmland. African wild dogs are sometimes affected by viral diseases like rabies, distemper, and parvovirus.

The Painted Dog Conservation (PDC) effort, based in Hwange National Park in western Zimbabwe, works with local communities to create new ways of helping the wild dog and its habitat.

All content from Kiddle encyclopedia articles (including the article images and facts) can be freely used under Attribution-ShareAlike license, unless stated otherwise. Cite this article:
African wild dog Facts for Kids. Kiddle Encyclopedia.