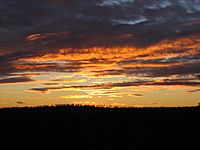 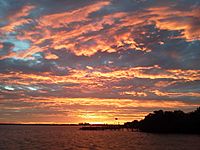 Twilight means either dawn (in the morning) or dusk (in the evening).

In the morning, dawn is when it is not dark any more, and the light of the sun is just starting to appear. In the evening, it is the other way around and that phenomenon is called dusk. The sun has disappeared, and darkness is setting in. Light fades away.

The following have been defined:

For all these definitions, the horizon is at the sea which is flat.

All content from Kiddle encyclopedia articles (including the article images and facts) can be freely used under Attribution-ShareAlike license, unless stated otherwise. Cite this article:
Twilight Facts for Kids. Kiddle Encyclopedia.