Kids Encyclopedia Facts
This page is about the California community. For persons named Landers, see Lander.

Landers is an unincorporated community in the High Desert region of the Mojave Desert, in San Bernardino County, Southern California. Landers' population, as of 2017, is 2,982 people. Its residents are sometimes referred to as "Landroids"—an allusion to the popular UFO culture in the area—and its official slogan is "Beautiful Skies, Miles of Smiles," adopted pursuant to a contest held by the Landers Association in early 2014. It was submitted by Ms. McCall's 3rd and 4th grade class at Landers Elementary School and was unveiled on June 10, 2014. However, for almost half a century, Landers has been known to its residents as "the land of 1000 vistas".

Landers lies in the Homestead Valley of the southeastern Mojave Desert. The town's elevation is 3,100 feet (940 m) above sea level.

Landers, 14 miles (23 km) north of Yucca Valley, is bordered by the city of Joshua Tree to its southeast, Johnson Valley, California to its north, and Pioneertown to its southwest. California State Route 247, named "Old Woman Springs Road" in the area, passes through Landers from Yucca Valley en route north to Barstow. 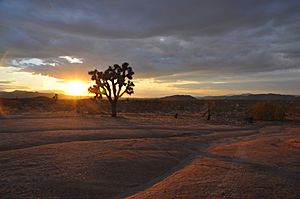 Landers is known as: "The Land of a Thousand Vistas". 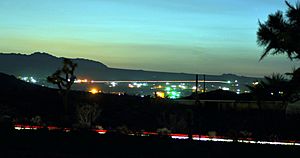 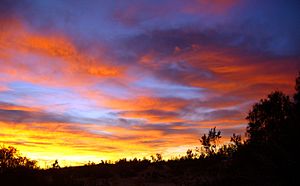 Adjacent to Landers on the north is Giant Rock, covering 5800 sq. ft. and 7 stories high. [http://www.lucernevalley.net/giantrock/ It is thought to be the largest free standing boulder in the world. It was sacred to the Californian Indians in the region, where the north and south tribes met annually.

From the 1950s through the 1970s, Landers was a popular gathering point for annual Spacecraft Conventions of UFO enthusiasts.

The area was also the epicenter of the June 28, 1992 Landers earthquake, a magnitude 7.4 strike-slip earthquake. It caused considerable structural damage to the surrounding area, and one death, of a three-year-old child.

A news image frequently shown was the north wall completely collapsed at the Yucca Lanes Bowling Center. It was later determined that the wall was a temporary one, designed for easy removal in future expansions.

Kate's Lazy Desert Airstream Motel is an unusual 'motel camp' in Landers, composed of six vintage Airstream trailers restored by artists Maberry + Walker. The resort was created by Kate Pierson of the B-52's.

Author, inventor, and UFO advocate George Van Tassel (1910-1978) built the Integratron structure in the Giant Rock area from 1957 to 1977. The Integratron dome is built using a unique design of wood construction with 16 glued and laminated spines held together at its apex by one ton of concrete. It is 38 feet (12 m) high and 50 feet (15 m) in diameter.

The compound is now open to the public as a study, performance, and retreat center for organized programs regarding neuroacoustics, music, meditation, energy healing, architecture, alternative health, science, and spirituality. The Integratron, and Giant Rock are Landers' main tourist attractions. 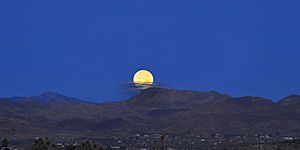 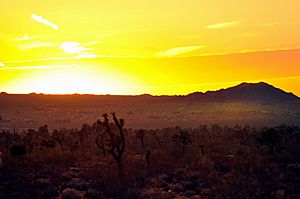 The U.S. Landers Post Office is located at Landers Lane and Reche Road, serving ZIP code 92285. A Loyal Order of Moose Lodge, community center (Belfield Hall), convenience store, elementary school, and recreational center with lighted ball field are also located in this rural desert community. The Landers Brew Co. occupies an old roadhouse originally built in 1948. There was once a Landers Airport, as well as one nearby at Giant Rock, both with short, packed dirt runways adequate for single engine aircraft. Neither facility is operational today.

Gubler Orchids first established its nursery greenhouses in Landers in 1975. The original greenhouses were severely damaged in the 1992 Landers earthquake; after three years of reconstruction and modernization they reopened in 1995. Today Gubler has over 155,000 square feet of greenhouses in production, and ships its plants and growing products primarily in the United States and Canada. In conjunction with community groups and local schools, Gubler Orchids sponsors a festival and open house each year the first weekend in October.

There are two major amateur astronomical facilities in Landers: The Goat Mountain Astronomical Research Station (GMARS) and the Center for Solar System Studies (CS3). GMARS is owned by the Riverside Astronomical Society, and is one of the most ambitious installations of its kind in the world with over 23 observatories and a solar powered USGS seismic station. It also has over twenty telescope "pads" with electrical service that are used with field gear. For use by those pursuing scientific activities at GMARS, the facility has been assigned the international observatory code of G79. CS3 has nine robotic observatories and is primarily focused on asteroid research and photometric studies. The observatory codes assigned at CS3 include U80, U81 and U82. 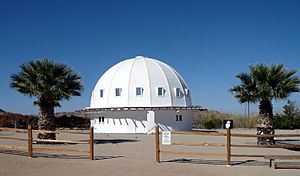 Author, inventor, and UFO advocate George Van Tassel (1910–1978) built the Integratron structure in the Giant Rock area from 1957 to 1977. The Integratron dome is built using a unique design of wood construction with 16 glued and laminated spines held together at its apex by one ton of concrete. It is 38 feet (12 m) high and 50 feet (15 m) in diameter.

The Integratron and Giant Rock are the two Landers sites of most interest to UFO enthusiasts. Renowned food and travel personality Anthony Bourdain did a segment in 2011 on Van Tassel and the Integratron as part of his No Reservations television series (s07e13 - see here). Van Tassel, the Integratron and Giant Rock received serious treatment in 2018 by filmmaker Jonathan Berman in his documentary, Calling All Earthlings. The Smithsonian magazine, Air & Space, has an informative article on the documentary here. The compound is now open to the public as a study, performance, and retreat center for organized programs regarding neuroacoustics, music, meditation, energy healing, architecture, alternative health, science, and spirituality.

All content from Kiddle encyclopedia articles (including the article images and facts) can be freely used under Attribution-ShareAlike license, unless stated otherwise. Cite this article:
Landers, California Facts for Kids. Kiddle Encyclopedia.