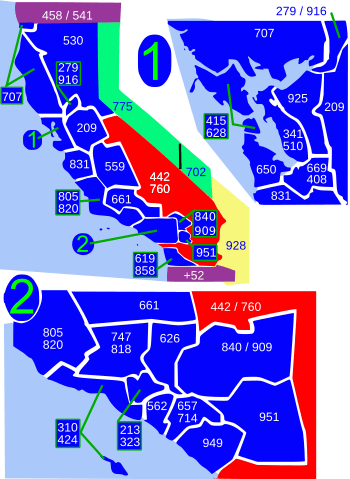 Area code 760 is a California telephone area code that was split from area code 619 on March 22, 1997. Area code 442 is an overlay of 760 that became effective on November 21, 2009. It encompasses much of the southeastern and southernmost portions of California. The area includes Imperial, Inyo, and Mono counties, as well as portions of San Diego, Riverside, San Bernardino, Los Angeles and Kern counties.

Area code 760 was split from 619 in 1997, which in turn had been split from area code 714 in 1982. Within a decade of its creation, however, the proliferation of cell phones and pagers left 760 strained to the point that a new area code was needed for the area. The initial plan was a further area code split, with the San Diego and Imperial portions moving to a new 442 area code. However, this met with protests from businesses who did not want to change their numbers for the second time in a decade. Ultimately, the California Public Utilities Commission decided that 442 would be added as an overlay to 760 instead, and since 2009 all users in the region have been required to include the area code even when dialing local calls.

Areas within this area code which had manual service in the past include:

All content from Kiddle encyclopedia articles (including the article images and facts) can be freely used under Attribution-ShareAlike license, unless stated otherwise. Cite this article:
Area codes 760 and 442 Facts for Kids. Kiddle Encyclopedia.