Mono County ( MOH-noh) is a county located in the east central portion of the U.S. state of California. As of the 2010 census, the population was 14,202. making it the fifth-least populous county in California. The county seat is Bridgeport. The county is located east of the Sierra Nevada between Yosemite National Park and Nevada. The only incorporated town in the county is Mammoth Lakes, which is located at the foot of Mammoth Mountain. Other locations, such as June Lake, are also famous as skiing and fishing resorts. Located in the middle of the county is Mono Lake, a vital habitat for millions of migratory and nesting birds. The lake is located in a wild natural setting, with pinnacles of tufa arising out of the salty and alkaline lake. Also located in Mono County is Bodie, the official state gold rush ghost town, which is now a California State Historic Park. 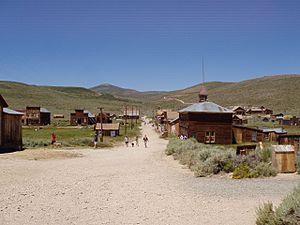 Bodie, as seen from the hill looking to the cemetery

Mono County was formed in 1861 from parts of Calaveras, Fresno and Mariposa counties. Parts of the county's territory were given to Inyo County in 1866.

The county is named after Mono Lake which, in 1852, was named for a Native American Paiute tribe, the Mono people, who historically inhabited the Sierra Nevada from north of Mono Lake to Owens Lake. The tribe's western neighbors, the Yokut, called them monachie, meaning "fly people" because they used fly larvae as their chief food staple and trading article.

Archeologists know almost nothing about the first inhabitants of the county, as little material evidence has been found from them. The Kuzedika, a band of Paiute, had been there many generations by the time the first anglophones arrived. The Kuzedika were hunter-gatherers and their language is a part of the Shoshone language. 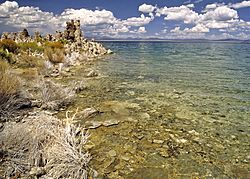 In June 2021, U.S. News & World Report ranked the county with the third best life expectancy in the United States at 96.5 years old.

There were 5,137 households, out of which 28.7% had children under the age of 18 living with them, 50.6% were married couples living together, 6.5% had a female householder with no husband present, and 38.8% were non-families. 26.6% of all households were made up of individuals, and 4.3% had someone living alone who was 65 years of age or older. The average household size was 2.43 and the average family size was 2.98. 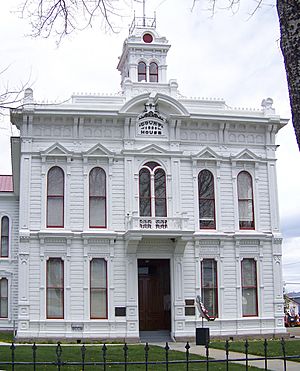 The population ranking of the following table is based on the 2010 census of Mono County.

All content from Kiddle encyclopedia articles (including the article images and facts) can be freely used under Attribution-ShareAlike license, unless stated otherwise. Cite this article:
Mono County, California Facts for Kids. Kiddle Encyclopedia.