Mammoth Lakes is a town in Mono County, California, and is the county's only incorporated community. It is located immediately to the east of Mammoth Mountain, at an elevation of 7,880 feet (2,400 m). As of the 2020 United States Census, the population was 7,191, reflecting a 12.7% decrease from the 2010 Census.

The first people to inhabit the vicinity of Mammoth Lakes was the Mono people. Evidence declares that they have been living in the area for thousands of years. They settled in the valley but walked to other places when trading with different tribes.

The European history of Mammoth Lakes started in 1877, when four prospectors staked a claim on Mineral Hill, south of the current town, along Old Mammoth Road. In 1878, the Mammoth Mining Company was organized to mine Mineral Hill, which caused a gold rush. By the end of 1878, 1500 people settled in the mining camp called Mammoth City. By 1880, the company had shut down, and by 1888, the population declined to less than 10 people. By the early 1900s, the town of Mammoth was informally established near Mammoth Creek. The economics of the original town was based on logging and tourism. The first post office at Mammoth Lakes opened in 1923.

In 2004, the Mammoth Ski Museum opened in town. The museum featured many vintage artifacts, photographs, and posters. A movie documenting the life of the founder of the ski resort (Dave McCoy) and those of early famous skiers in the area is shown. In 2010, photographs taken by Dave McCoy were featured in an exhibit at the museum.

In 2008, after a jury trial, the Mono County Superior Court entered a $43 million judgment against the Town of Mammoth Lakes for breach of a development agreement. The California Court of Appeal, Third District, affirmed the judgment in December 2010, and the California Supreme Court declined to hear the appeal on March 23, 2011. On Monday July 2, 2012, Mammoth Lakes filed for bankruptcy in the face of the judgement. Later the same year, the bankruptcy was dismissed as a result of a settlement between the town and their largest creditor. 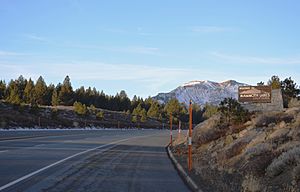 Mammoth Lakes lies on the edge of the Long Valley Caldera. The area around the town is geologically active, with hot springs and rhyolite domes that are less than 1000 years old.

Visitors can take State Route 203 from the town of Mammoth Lakes to the Mammoth Mountain Ski Area, over Minaret Summit, then down to Devils Postpile National Monument, with access to the Ansel Adams Wilderness.

The area has natural hot springs which are sometimes used after skiing. Other features include lakes, a soda springs, and an obsidian dome. Mammoth Lakes is north of the Owens Valley, a scenic area with extensive hiking opportunities.

The town is surrounded by mountains: on the west, Mammoth Mountain looms over the town, while to the south, the Sherwin Range dominates the view. This hilly terrain and the high altitude makes the area great for high-altitude athletic training, including among elite long-distance runners, who live and train in the thin air.

The town is surrounded by acres of forest and is bordered by the Ansel Adams and John Muir Wilderness Areas. The eastern entrance of Yosemite National Park is located 32 miles (51 km) north of town. The town is situated in the southwestern, mountainous part of Mono County, California.

As of 2019, the United States Census estimated there to be 8,235 residents in Mammoth Lakes.

There were 2,814 households, out of which 28.4% had children under the age of 18 living with them, 43.3% were married couples living together, 6.0% had a female householder with no husband present, and 46.1% were non-families. 28.3% of all households were made up of individuals, and 2.3% had someone living alone who was 65 years of age or older. The average household size was 2.44 and the average family size was 3.09.

Mammoth Lakes' economy is primarily tourism-based. For example, Mammoth Mountain Ski Resort is the top ski destination in California. A 13% tax is added to the rental of any lodging facility and campgrounds for stays of less than a month. There are more than 4,599 rental units in Mammoth Lakes and the lodging industry generates around two-thirds of the gross revenue of the Town of Mammoth Lakes. As well as the pull from winter extreme sports, Mammoth Lakes also benefits greatly from tourism in the summer from people who visit to camp, hike and fish.

The Mammoth Lakes real estate market has gone through ups and downs over the past few decades. In 1980, an earthquake with magnitude of 6.1 on the Richter scale sent area property values plummeting on fears of a potential volcanic eruption similar to the 1980 eruption of Mount St. Helens. A significant real estate surplus formed after this, during which Mammoth Lakes had a total of over 1200 properties on the market. The development of the Mammoth Mountain ski area has had a direct effect on housing in more recent years. The tourist market has led to an explosion of property values. This peaked in 2003 when the median property value reached $750,000. Another peak occurred in 2006 with the sale of the Mammoth Mountain ski area to Starwood Capital Group. As of February 2010, the median listing price was $460,000. This represents a drop of over 38% from the peak reached in 2006.

The Mono County Office of Education offers an alternative high school, the Jan Work Community School, where highly motivated students are allowed to earn credits more quickly than may be earned in a traditional semester.

The Mammoth Lakes Campus of Cerro Coso Community College is also known as the Eastern Sierra College Center. It was established in 1998 and is accredited by the Accrediting Commission for Community and Junior Colleges (ACCJC). 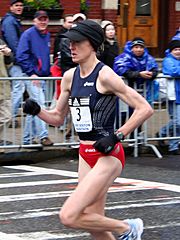 All content from Kiddle encyclopedia articles (including the article images and facts) can be freely used under Attribution-ShareAlike license, unless stated otherwise. Cite this article:
Mammoth Lakes, California Facts for Kids. Kiddle Encyclopedia.