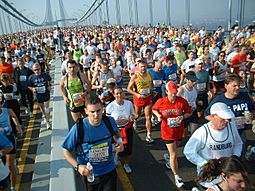 The New York City Marathon (called the ING New York City Marathon because it is sponsored by financial company ING Group) is a yearly marathon that goes through all five boroughs of New York City. The distance of the race is 26.219 miles. It starts at the Verrazano-Narrows Bridge and ends at Columbus Circle. It takes place on the first Sunday of November. It is one of the largest marathons in the world. 50,304 people ran the marathon in 2013. It has been held every year since 1970 except for 2012, when the race was cancelled because of Hurricane Sandy.

All content from Kiddle encyclopedia articles (including the article images and facts) can be freely used under Attribution-ShareAlike license, unless stated otherwise. Cite this article:
New York City Marathon Facts for Kids. Kiddle Encyclopedia.