Long Island City (L.I.C.) is the westernmost residential and commercial neighborhood of the New York City borough of Queens. L.I.C. is noted for its rapid and ongoing residential growth and gentrification, its waterfront parks, and its thriving arts community. L.I.C. has among the highest concentration of art galleries, art institutions, and studio space of any neighborhood in New York City. It is bordered by Astoria to the north; the East River to the west; Hazen Street, 49th Street, and New Calvary Cemetery in Sunnyside to the east; and Newtown Creek—which separates Queens from Greenpoint, Brooklyn—to the south. It originally was the seat of government of the Town of Newtown, and remains the largest neighborhood in Queens. The area is part of Queens Community Board 1, located north of the Queensboro Bridge and Queens Plaza; it is also of Queens Community Board 2 to the south.

Long Island City is the eastern terminus of the Queensboro Bridge, also known as the 59th Street Bridge, which is the only non-toll automotive route connecting Queens and Manhattan. Northwest of the bridge terminus are the Queensbridge Houses, a development of the New York City Housing Authority and the largest public housing complex in North America.

Detail of map of LIC, from Greater Astoria Historical Society

Long Island City, as its name suggests, was formerly a city, created in 1870 from the merger of the Village of Astoria and the hamlets of Ravenswood, Hunters Point, Blissville, Sunnyside, Dutch Kills, Steinway, Bowery Bay and Middleton in the Town of Newtown. At time of incorporation, Long Island City had between 12,000 and 15,000 residents. Its charter provided for an elected mayor and a ten-member Board of Alderman with two representing each of the city's five wards. City ordinances could be passed by a majority vote of the Board of Aldermen and the mayor's signature.

In the 1880s, Mayor De Bevoise nearly bankrupted the Long Island City government by embezzling, of which he was convicted. Many dissatisfied residents of Astoria circulated a petition to ask the New York State Legislature to allow it to secede from Long Island City and reincorporate as the Village of Astoria, as it existed prior to the incorporation of Long Island City, in 1884. The petition was ultimately dropped by the citizens.

Long Island City continued to exist as an incorporated city until 1898, when all of Queens was annexed to New York City. The last mayor of Long Island City was a notorious Irish-American named Patrick Jerome "Battle-Axe" Gleason.

The city surrendered its independence in 1898 to become part of the City of Greater New York. However, Long Island City survives as ZIP code 11101 and ZIP code prefix 111 (with its own main post office) and was formerly a sectional center facility (SCF). Since 1985, the Greater Astoria Historical Society, a nonprofit cultural and historical organization, has been preserving the past and promoting the future of the neighborhoods that are part of historic Long Island City. 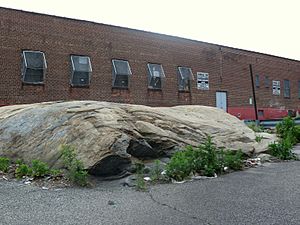 In 2006, a resident of nearby Woodside, Hiroyuki Takenaga, proposed establishing a Japantown in Long Island City. 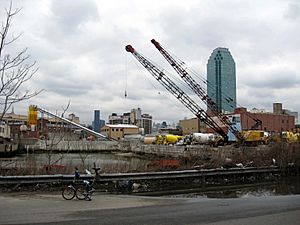 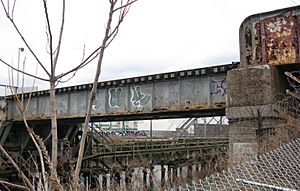 Dutch Kills was a hamlet, named for its navigable tributary of Newtown Creek, that occupied what today is centrally Queensboro Plaza. Dutch Kills was an important road hub during the American Revolutionary War, and the site of a British Army garrison from 1776 to 1783. The area supported farms during the 19th century. The canalization of Newtown Creek and the Kills at the end of the 19th century intensified industrial development of the area, which prospered until the middle of the 20th century. The neighborhood is currently undergoing a massive rezoning of mixed residential and commercial properties.

Blissville, which has the ZIP code 11101, is a neighborhood within Long Island City, located at 40°44'4.87"N73°56'9.81"W and bordered by Calvary Cemetery to the east; the Long Island Expressway to the north; Newtown Creek to the south; and Dutch Kills, a tributary of Newtown Creek, to the west. Blissville was named after Neziah Bliss, who owned most of the land in the 1830s and 1840s. Bliss built the first version of what was known for many years as the Blissville Bridge, a drawbridge over Newtown Creek, connecting Greenpoint, Brooklyn and Blissville; it was replaced in the 20th century by the Greenpoint Avenue Bridge, also called the J. J. Byrne Memorial Bridge, located slightly upstream. Blissville existed as a small village until 1870 when it was incorporated into Long Island City. Historically an industrial neighborhood, it has a small park with a monument at 54th Avenue and 48th Street. 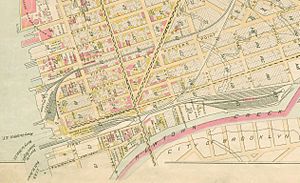 Hunters Point is on the south side of Long Island City. It contains the Hunters Point Historic District, a national historic district that includes 19 contributing buildings along 45th Avenue between 21st and 23rd Streets. They are a set of townhouses built in the late 19th century. It was listed on the National Register of Historic Places in 1973.

Long Island City is home to a large and dynamic artistic community.

As of the 2010 U.S. Census, Long Island City comprises a population that is 1% Native American Indian, 10% African American, 15% Asian or Pacific Islander, 52% White, 9% mixed race, and 15% of "other" demographics. There is an equal proportion of female residents to male residents. 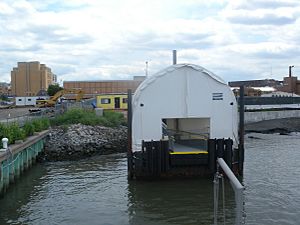 During the summer, the New York Water Taxi Company used to operate Water Taxi Beach, a public beach artificially created on a wharf along the East River, accessible at the corner of Second Street and Borden Avenue. It was discontinued in 2011 due to new construction on the site of the old landing.

Cars enter by the Pulaski Bridge, the Queensboro Bridge, the Queens–Midtown Tunnel, and the Roosevelt Island Bridge connecting Long Island City and Astoria to Roosevelt Island. Major thoroughfares include 21st Street, which is mostly industrial and commercial; I-495 (Long Island Expressway); the westernmost portion of Northern Boulevard, which becomes Jackson Avenue (the former name of Northern Boulevard) south of Queens Plaza; and Queens Boulevard, which leads westward to the bridge and eastward follows New York State Route 25 through Long Island; and Vernon Boulevard.

Long Island City is expected to be served by the Citywide Ferry Service starting in 2017.

All content from Kiddle encyclopedia articles (including the article images and facts) can be freely used under Attribution-ShareAlike license, unless stated otherwise. Cite this article:
Long Island City Facts for Kids. Kiddle Encyclopedia.