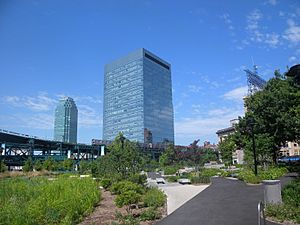 Queens Plaza is a plaza straddling the western end of Queens Boulevard in Long Island City, Queens, between 21st Street and Jackson Avenue/Northern Boulevard (NY 25A). The plaza is overlapped by elevated subway tracks (which were constructed in 1914). The Queensboro Bridge starts near the middle of the plaza. It has a New York City Subway stop for the E, ​M, and ​R train at the Queens Plaza station below ground along the eastern edge, and the Template:NYCS Queensboro trains at the Queensboro Plaza station above the west central part of the plaza on elevated tracks. 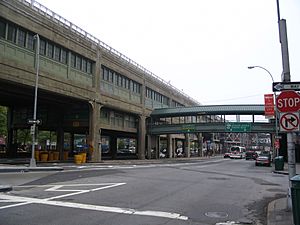 South side before renovation

The location was the center of the 18th century village of Dutch Kills; two millstones were preserved as relics of that time, to be displayed in a green space. The plaza itself was built to accommodate the connection of the Queensboro Bridge to Queens Boulevard; it opened in 1909 to a celebration involving the mayor of New York City, the governor of New York, the United States Secretary of War, and a crowd of 50,000 people. A street, named Jane Street, was widened by 90 feet (27 m) and was renamed Bridge Plaza North and South. Grassy medians, cut off at each intersection, divided the main and service lanes of the plaza. Sculptures made out of flowers and trees, including a 75 feet (23 m) "crescent with a Japanese cherry tree at its center", were prevalent. At the time, it was spacious, with only a few buildings on the sides and a solitary flagpole in the center of the plaza.

By 1915, the bridge was overcrowded with traffic, and subway tracks were built above the plaza. From the 1920s through World War II, it served as the location for many factories and warehouses, some of which later became office buildings. The Brewster Building, a factory along the plaza, made horse-drawn carriages, Rolls-Royces and other cars, and the Brewster F2A Buffalo fighter plane. The Long Island Savings Bank, Silvercup Bakery and Chase Manhattan Bank Building also were built on the plaza. By 1928, 86,000 cars went through the Queensboro Bridge and onto the plaza each day. 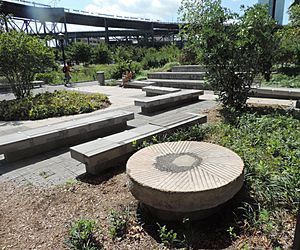 The millstones, returned to Dutch Kills Green in the 2014 renovation

By the early 2000s, Long Island City was going through gentrification, and new buildings were being put up, especially around Queens Plaza. In 2001, the area was rezoned, and 2,500 of about 5,000 apartments were built or planned within two blocks of the plaza. City officials decided to clean up the plaza, since the area was being gentrified. In 2005, the U.S. Congress approved a measure to demolish the municipal parking lot and turn it into a 1.5 acres (6,100 m2) park. In 2009, $75 million was earmarked to clean and spruce up the area and to renovate the plaza. 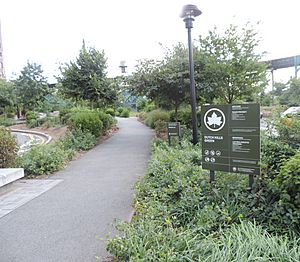 Park in eastern part of plaza, after renovation

The renovation itself cost only $45 million. It created a new public park within the plaza, on the former site of the municipal parking lot; the park was envisioned as an "urban oasis" or neighborhood meeting place. Another new public park, named Dutch Kills Green, was built as part of the renovation; it has 500 trees, wetlands, and pavers for storm drainage. It is right next to two new hotels: the 16-floor, 183-room Hilton Garden Inn, and a 31-floor, 160-room Marriott. New office buildings are also coming into the area. Even though the Metropolitan Life Insurance Company moved two-thirds of its employees from the Brewster Building on Queens Plaza North back to Manhattan in 2006 because of the distance and lack of restaurants in Queens Plaza, airline company JetBlue and advertising and public relations firm Publicis later moved into the same former factory. Real estate developer Tishman Speyer was also looking for tenants for its Queens Plaza South skyscraper, named 2 Gotham South.

However, the plaza is not exactly a neighborhood. Only 1,000 people live on the plaza, as of the 2000 United States Census.

All content from Kiddle encyclopedia articles (including the article images and facts) can be freely used under Attribution-ShareAlike license, unless stated otherwise. Cite this article:
Queens Plaza (Queens) Facts for Kids. Kiddle Encyclopedia.