Queensbridge Houses, also known simply as Queensbridge, is a public housing development in the Long Island City neighborhood of Queens, New York City. Owned by the New York City Housing Authority, the development contains 96 buildings and 3,142 units accommodating approximately 7,000 people in two separate complexes (North and South). The complex opened in 1939 and is the largest housing project in North America.

Queensbridge is located in Queens Community District 1, and its ZIP Code is 11101.

The Queensbridge Housing Projects, the largest of Queens's twenty-six developments, is located between Vernon Boulevard, which runs along the East River, and 21st Street. It is immediately south of the Ravenswood power plant, and just north of the Queensboro Bridge, the latter of which the complex is named after. The complex is the largest housing project in North America. The development is separated into two complexes, the North Houses on 40th Avenue and the South Houses on 41st Avenue. The namesake station of the New York City Subway's IND 63rd Street Line (F <F>​ trains) is on the eastern side of the complex on 21st Street. 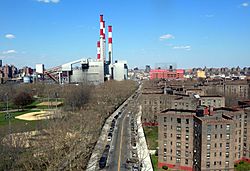 The 96-unit six-story buildings are distinctive due to their shape of two Y's connecting at the base. This shape was used as the architects hoped it would give residents more access to sunlight than the traditional cross-shape. The design was said to be cost-efficient, and they reduced the cost even further by using elevators that only stopped at the 1st, 3rd, and 5th floors. Political pressure to keep costs down was a key reason for the use of cheap designs. W.F.R. Ballard, Henry S. Churchill, Frederick G. Frost, and Burnett Turner designed Queensbridge Houses.

In many aspects the buildings of Queensbridge are very similar to most government-built housing projects of the era. They are a worn grayish brown which now suffers noticeable deterioration and weathering. Each building is painted red to about four feet up from the ground, giving a united feel to the entire complex because a uniform red "layer" is always close, throughout the complex. On each of the corners in Queensbridge, the New York City Housing Authority has posted signs indicating the project's name and management: "Queensbridge North (or South) Houses NYCHA." These signs come in several varieties depending on their age. The oldest signs, erected in the early nineties, are simply orange and blue, with the newer signs featuring graphics, like those of many other projects.

Access to buildings in the complex is by key or via a new intercom system. The halls of Queensbridge’s buildings are comparable to most municipal buildings, and are dilapidated and lined with worn light blue tiles. Apartments are painted white and are fairly small, even by New York City standards. Within the last few years, the elevators have been rebuilt and now stop at floors 1, 2, 3, 4, and 5 and kitchens have been completely renovated and now have frost-free refrigerators. Three thousand bathrooms were renovated with new tubs, toilets, vanities, floor tile and lighting in 2000. This followed a renovation in 1986 when 1000 of the bathrooms were renovated by Arc Plumbing. 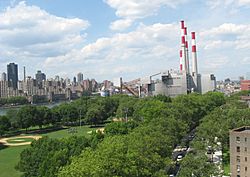 As a result of the 1937 Wagner Housing Act, Congress would only approve funds for public housing if the housing was unattractive to middle-class families who would otherwise buy or rent homes in the private housing market. The original plans nonetheless included some basic amenities, like a central shopping center, a nursery and six inner courtyards for play. In the 1950s, there were also three playschool rooms, a library, a community center with an auditorium where shows were put on, a gymnasium with a wooden floor that doubled as a wooden-wheels roller skating rink, activity rooms downstairs, and a cafeteria upstairs where the playschool children ate their lunches. Some of the downstairs activities included tap dancing, ballet, art, playing the recorder and singing, pool, knock hockey and table tennis, as well as Girl Scout and Boy Scout meetings. Residents enjoyed concerts during the hot summer months in the square central shopping area, and the Fresh Air Fund sent poor children out to the Peekskill mountains to release them from the crime and grit plagued streets.

The buildings in the complex are divided by a series of paths and small lawns. Also in the complex are several basketball courts and play areas lined with benches. Across Vernon Boulevard lies Queensbridge Park, which has a fully lit baseball diamond, running paths, lawns and areas for picnicking. That park, home to the Queensbridge Little League, is the primary place of recreation for tenants of the project. Queensbridge Park is the venue for numerous summertime live concerts, with music ranging from R&B to Latin. During the 1950s and up through 1970, Queensbridge Park was called "River Park," after the East River that runs next to it. There was also a smaller park placed conveniently right under the Queensboro Bridge called "Baby Park". Baby Park was closed due to debris falling from the bridge during maintenance work in the late 2000s. Baby Park was replaced by a new playground for the same age range, between 40th-41st Avenues, within Queensbridge Park itself.

Queensbridge Houses opened in 1939. During the 1950s, the management changed the racial balance of Queensbridge by transferring all families whose income was more than $3,000/year, a majority of whom were White, to middle-income housing projects, and replacing most of these tenants with African American and Latino families. In addition to providing safe and sanitary housing to many low-income African American and Latino families, this policy also promulgated racial segregation in public housing.

Queensbridge has historically proven to be a hotbed of hip hop music and rap. Famed producer Marlon “Marley Marl” Williams was the first in a long succession of acclaimed artists from “The Bridge”, which became one of the most prolific hip hop-producing neighborhoods in the country. Marley's Juice Crew collective, hugely influential in the 1980s, featured among its members Queensbridge rappers Kool G Rap, MC Shan, Roxanne Shanté, and Craig G, each noted names in their own right. Most notable of today's Queensbridge hip hop artists is the well acclaimed rapper Nas, who has since the 1990s frequently used his music and lyricism to reference Queensbridge and its hip hop history. Other noted artists associated with Queensbridge include Blaq Poet, Prodigy and Havoc of Mobb Deep, Cormega, Tragedy Khadafi, Nature, Screwball, Capone of Capone-N-Noreaga and Big Noyd. In regards to the Queensbridge music scene, XXL columnist Brendan Frederick wrote:

By the 1970s, the Queensbridge Houses experienced a rise in crime with the rest of the city. However, toward the 2000s, crime went down.

For many years Queensbridge has had a problem with drug dealers and drug users. An 11-month police investigation led to the arrest of 37 people during a drugs bust in February 2005. Another raid in February 2009, following a seven-month investigation, resulted in 59 arrests.

All content from Kiddle encyclopedia articles (including the article images and facts) can be freely used under Attribution-ShareAlike license, unless stated otherwise. Cite this article:
Queensbridge Houses Facts for Kids. Kiddle Encyclopedia.