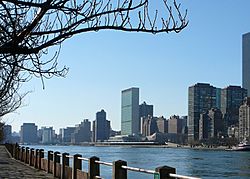 The East River is a tidal strait in New York City. It connects Upper New York Bay on its south end to Long Island Sound on its north end. It separates Long Island, including the boroughs of Queens and Brooklyn, from the island of Manhattan and the Bronx. Several bridges and tunnels cross the East River. The Brooklyn Bridge is the oldest and most famous.

All content from Kiddle encyclopedia articles (including the article images and facts) can be freely used under Attribution-ShareAlike license, unless stated otherwise. Cite this article:
East River Facts for Kids. Kiddle Encyclopedia.