Whitestone is an upper middle-class residential neighborhood in the northernmost part of the New York City borough of Queens. The neighborhood proper is located between the East River to the north and 25th Avenue to the south. Whitestone is surrounded by College Point, Flushing, Bayside, Auburndale, Linden Hill, and Murray Hill.

Whitestone contains the subsection of Malba, which is bounded to the north by the East River, to the east by the Whitestone Expressway, to the south by 14th Avenue, and to the west by 138th Street. Malba was cited in a New York Times article as one of the few "elite enclaves" of Queens.

Dutch settlers derived the name of the town from limestone that used to lie on the shore of the river according to a popular tradition. This tradition is supported by 17th century wills and deeds, which may be found in The New York Genealogical and Biographical Record, that refer to "the white stone" as a local landmark and survey reference point. Whitestone got its name because the settlers discovered that Whitestone was built on white limestone. The neighborhood is patrolled by the NYPD's 109th Precinct, and is part of Queens Community Board 7. It is traditionally bounded by the Bronx-Whitestone Bridge (opened 1939) on the west and the Throgs Neck Bridge (opened 1961) on the east. The zip code of Whitestone is 11357.

The area was, in large part, the estate of Francis Lewis, a delegate to the Continental Congress and a signer of the Declaration of Independence. The estate was the site of an English raid during the Revolutionary War. Lewis was not present but his wife was taken prisoner and his house was burned to the ground. For a period of time Whitestone was called Clintonville after Dewitt Clinton, the former governor of New York; this etymology is present in the name of Cliftonville Street, located in the neighborhood. In the late 19th century, many wealthy New Yorkers began building mansions in the area, on what had once been farmland or woodland. Rapid development of the area ensued in the 1920s, however, as trolley and Long Island Rail Road train service on the Whitestone Branch was expanded into the neighborhood. Although this rail service ended during the Great Depression, part of the right-of-way was later used by Robert Moses to help construct the Belt Parkway, which includes the Whitestone Expressway which runs along the southeast edge of the former Flushing Airport and through Whitestone. Flushing Airport has been abandoned since 1985.

Further development came with the building of the Bronx-Whitestone Bridge in 1939. The bridge measures 2,300 feet and was the fourth longest bridge in the world at the time of its construction. 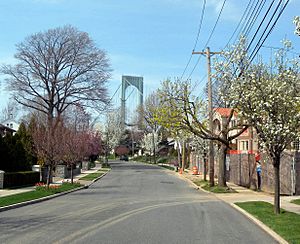 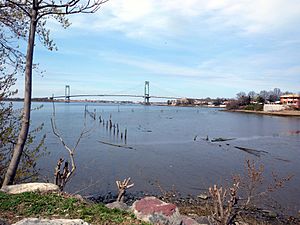 The name of the subsection of Malba in northern Whitestone is derived from the first letters of the surnames of its five founders of the Malba Land Company: Maycock, Alling, Lewis, Bishop, and Avis. Malba is considered part of Whitestone, one of the more affluent communities in Queens. Demographically, the population is mostly white and of European descent (Greek, Irish, Italian, and Jewish), with a small minority of Asian Americans. Most of the residential properties in Malba are large homes.

The first known resident of the area known as present-day Malba was David Roe, who arrived from England in the 1640s. According to Clarence Almon Torrey's book, David Roe Of Flushing And Some Of His Descendants, Roe became a resident of Flushing circa 1666. In 1683, Roe was taxed upon owning 35 acres (140,000 m2) and thereafter increased his holdings substantially, ultimately acquiring the upland around what was to become Malba. Roe's farm was on the east side of the bay, which was then known as "Roe's Cove". He was among the most well-to-do citizens of Flushing, owning lands, farm stock, carpenter's tools and two slaves. 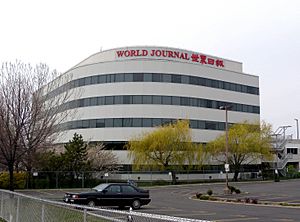 In 1786, John Powell purchased Roe's 87-acre (350,000 m2) parcel for 1,685 pounds, 6 shillings, and 8 pence. It has been reported that Roe lost his lands for his allegiance to the crown during the American War of Independence. Powell thereafter built a home and the cove was renamed "Powell's Cove", the name it bears today. During the 19th century, some of Powell's land passed into the hands of Harry Genet, a member of the Tammany Hall, New York City's infamous political machine. Powell's house was destroyed by fire in the 1890s.

During the second half of the 19th century, the Roe/Powell land passed to a succession of owners. A map dating from 1873 lists the Smiths, Biningers and Nostrands as landowners in the area. The Nostrand and Smith farms represented a large portion of what is Malba today. The area around Hill Court and 14th Avenue was known as "Whitestone Heights". In 1883 railroad service to Manhattan was extended on the "Whitestone and Westchester Railroad", later the Long Island Rail Road. The terminus of the Whitestone line was at "Whitestone Landing" (154th Street), a popular summer resort area during the late-19th century and early-20th century.

William Ziegler, a self-made industrialist and president of the Royal Baking Powder Company bought all these parcels in or about 1883 and his holdings became known as the "Ziegler Tract". Ziegler died on May 24, 1905, leaving his wife, Electa Matilda Ziegler (a philanthropist for the blind, among other things) and son, William, Jr., then 14 years of age.

William S. Champ (Ziegler's former secretary) and W.C. Demarest (Mrs. Ziegler's nephew) (both to become among the first families residing in Malba) formed a Realty Trust to purchase the Ziegler tract from his estate for development purposes. Champ was vice president of the Realty Trust, and also one of the executors of Ziegler's estate. The Ziegler Tract had been appraised for $100,000 shortly after Ziegler's death. In the spring of 1906, the Realty Trust secured over 100 investors from New Haven, Guilford, Bridgeport, and other Connecticut towns, to the planned purchase of the Ziegler Tract. Based on a review of early maps of the area, the developers, at one point, planned a very densely populated community; with homes on lots no bigger than 20 feet (6.1 m) wide. Obviously, this plan was modified and much larger properties were developed. The trust represented to the investors that the property could be purchased from the Ziegler estate for $640,000. In fact, the 163 acres (0.66 km2) which ultimately became Malba, had been earlier purchased from the Ziegler estate for $350,000. Thereafter such Connecticut residents as Samuel R. Avis, Noble P. Bishop, George W. Lewis, David R. Alling and George Maycock were elected trustees (altogether these were the five names that combined to form the MALBA name) of the Malba Land Company. The true, lesser, amount paid to Ziegler's estate was not uncovered until 1912. (For a complete discussion of the Realty Trust's acquisition of the land and its subsequent defense of a lawsuit from the Malba Land Company, see Crowe v. Malba Land Co., 135 N.Y.S. 454, 76 Misc. 676 (Sup. Ct. Queens Co. 1912)).

Development slowly began in 1908. A railroad station on the Whitestone line was added where 11th Avenue sits today. The Champs and Demarests were among Malba's first families to own homes in Malba. There were thirteen houses by the time of World War I and more than a hundred were built in the 1920s. The railroad station closed in 1932. The triangle by Malba Drive and 11th Avenue was dedicated as "Jane Champ Park" on November 16, 1969 and was renovated by the Malba Field and Marine Club in 2005. 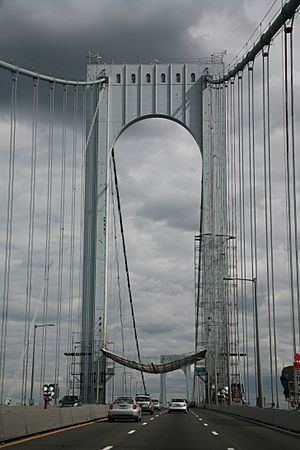 Roadway on the Bronx-Whitestone Bridge 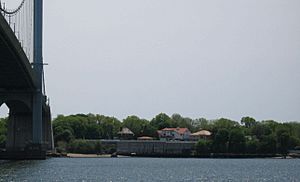 Houses in the Malba section of Whitestone, as seen looking south from Ferry Point Park in the Bronx

The Bronx–Whitestone Bridge gives access to and from the Bronx, as Whitestone is located across the East River from the Bronx. The Bronx-Whitestone Bridge carries I-678 (Whitestone Expressway) across the East River. The Cross Island Parkway merges into the Whitestone Expressway approximately 0.5 miles (0.80 km) before the bridge. On the Bronx side, the bridge leads directly into the Bruckner Interchange, the northern terminus of I-678, where the Cross Bronx Expressway (I-95 to the west, I-295 to the east), Bruckner Expressway (I-278 to the west, I-95 to the east), and Hutchinson River Parkway meet. The segment of I-678 between the bridge and the Bruckner Interchange is a depressed freeway.

The Whitestone Branch was a branch of the Long Island Rail Road, running north and east from Flushing. It ran north along Flushing Bay and east along the East River to Whitestone. Originally intended to lead into Westchester County, it was consolidated into the Long Island Rail Road in 1876. Stations consisted of Flushing–Bridge Street, College Point, Malba, Whitestone–14th Avenue, and Whitestone Landing at 155th Street, which later became the Beechhurst Yacht Club. Flushing–Bridge Street Station was built in 1870, College Point, and Whitestone–14th Avenue stations were opened in 1869, and Whitestone Landing Station was built in 1886, all by the F&NS Railroad. Malba station was built in 1909 by the LIRR. The line was abandoned on February 15, 1932, despite efforts by affected commuters to turn the line into a privately operated shuttle route. 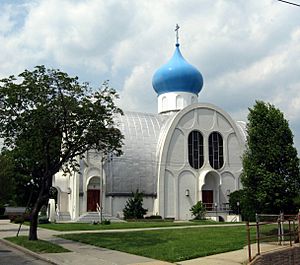 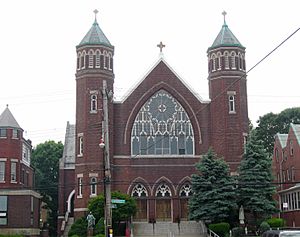 Community landmarks include St. Luke's Roman Catholic Church, Holy Trinity Roman Catholic Church and the Dwarf Giraffe Athletic League. The Grace Episcopal Church, on Clintonville street, was built in 1858 on land donated by the family of Francis Lewis. The Whitestone Hebrew Centre consists of two buildings on Clintonville Street and was founded in 1929. The Russian Orthodox Church of St. Nicholas, with its distinctive great blue onion dome, was built in 1968. The Greek Orthodox Church, Holy Cross, or "Timios Stavros", is located on 150th Street. Whitestone Academy is Whitestone's only high school.

All content from Kiddle encyclopedia articles (including the article images and facts) can be freely used under Attribution-ShareAlike license, unless stated otherwise. Cite this article:
Whitestone, Queens Facts for Kids. Kiddle Encyclopedia.