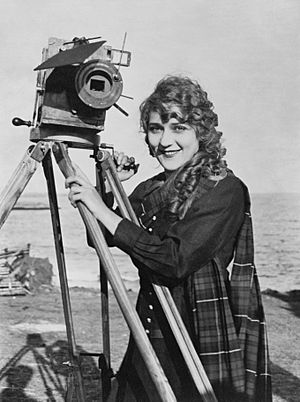 Mary Pickford (April 8, 1892– May 29, 1979) was a silent movie actress. She was born in Toronto, Ontario, Canada.She won the Academy Award for Best Actress for her role in Coquette. She was married to actor Charles "Buddy" Rogers.

Pickford was co-founder of United Artists. She was one of the original 36 founders of the Academy of Motion Picture Arts and Sciences. She married silent movie star Douglas Fairbanks. They lived in a Hollywood home called Pickfair. The American Film Institute named Pickford 24th among the greatest female stars of all time.

All content from Kiddle encyclopedia articles (including the article images and facts) can be freely used under Attribution-ShareAlike license, unless stated otherwise. Cite this article:
Mary Pickford Facts for Kids. Kiddle Encyclopedia.