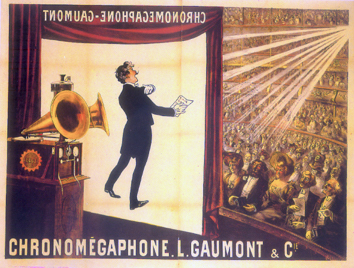 A sound film is a motion picture (or movie) with sound that has been synchronised with the image. Before sound films, there was only silent film, and dialogue was shown in words on the screen. The first known exhibition of sound movies took place in Paris in 1900. But sound movies were not widely made commercially until a long time later. The first commercial screening of a short sound movie took place in New York City in April 1923. They are now the standard kind of technology for movie making.

All content from Kiddle encyclopedia articles (including the article images and facts) can be freely used under Attribution-ShareAlike license, unless stated otherwise. Cite this article:
Sound film Facts for Kids. Kiddle Encyclopedia.