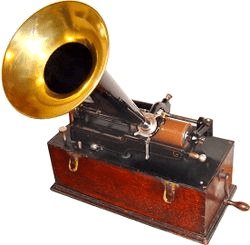 The phonograph, also called the record player or gramophone, is an electronic device that plays recorded sound. It was the most common device for playing recorded music from the 1870s through the 1980s. It was invented by Thomas Edison. Early phonographs recorded sound on cylinders, in addition to playing sound.

The phonograph plays sounds from a vinyl record. The record is placed onto the turntable. The turntable spins the record while a lever with a small needle on the bottom scrapes in between the little grooves in the vinyl. When this happens, music is played. These modern machines do not record. They play records that were made in a factory.

All content from Kiddle encyclopedia articles (including the article images and facts) can be freely used under Attribution-ShareAlike license, unless stated otherwise. Cite this article:
Phonograph Facts for Kids. Kiddle Encyclopedia.