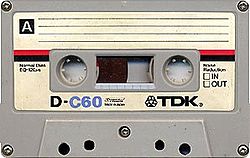 An audio cassette is a type of cassette which can store music and sounds. To play a tape, a cassette player or cassette recorder is used. Cassettes store the sound on a magnetic tape that is wound around the two reels in the cassette.

The standard audio cassette was invented in 1962 by the Philips company. They named it the "Compact Cassette". The first cassettes and cassette recorders were not very good. Over time, audio quality improved. During the 1970s, the cassette grew to be a popular physical audio format. Their popularity grew further during the following decades.

As compact discs grew in popularity, cassettes were used less. In 2011, the Oxford English Dictionary attempted to remove the word "cassette tape" from a small version of its book.

All content from Kiddle encyclopedia articles (including the article images and facts) can be freely used under Attribution-ShareAlike license, unless stated otherwise. Cite this article:
Audio cassette Facts for Kids. Kiddle Encyclopedia.