The Walkman line-up in the USA (2011)
From the left: S series, E series and W series

Walkman is the invention as well as the brand name of Sony. It represents a portable audio player. Today, similar devices are also called "Walkman". The name describes players that have small sizes and can be carried by one anywhere. The portable player was a revolutionary device since one could take favorite music with him or her. 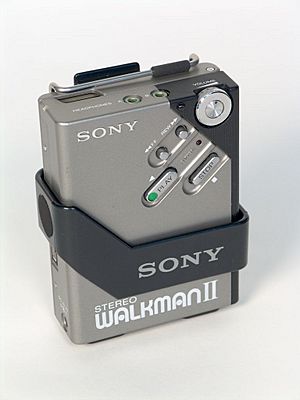 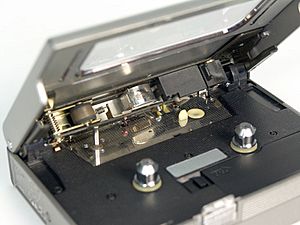 Inside a Walkman II

The original Walkman was released in 1979. The name "Walkman" was used in Japan, while abroad it had other names, one of which was "Soundabout". First the product did not have a name, and then one of the company's staff proposed "Walkman". Because it was a direct translation from Japanese, Sony's leadership seemed skeptical. They thought "Walkman" was not a suitable name for a device which was to be launched in the United States and Europe.

Sony used new ways to introduce its new product on the market and advertise it. The main idea of Sony was to make people aware that Walkman is a product that is unique on the market and that it is both new and fun. On June 22 (the date of release), Sony Walkman appeared in Tokyo. The company held an unusual press conference where different journalists were invited to Yoyogi, which is Tokyo's major park. They were given a Walkman to prove that the portable player is fun and easy to use.

All content from Kiddle encyclopedia articles (including the article images and facts) can be freely used under Attribution-ShareAlike license, unless stated otherwise. Cite this article:
Walkman Facts for Kids. Kiddle Encyclopedia.