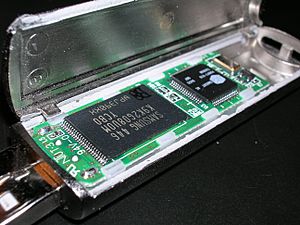 Flash memory is a memory storage device for computers and electronics. It is most often used in devices like digital cameras, USB flash drives, and video games. It was developed in the 1980s from the earlier and similar EEPROM.

Flash memory is different from RAM because RAM is volatile (not permanent). When power is turned off, RAM loses all its data. Flash can keep its data intact with no power at all. A hard drive is also permanent (non-volatile) storage, but it is bulky and fragile. Flash memory is one kind of Non-volatile random-access memory. It is slower than RAM but faster than hard drives. It is often used in small electronics because of its small size and lack of moving parts.

The main weakness of flash memory is that it is more expensive than hard drives for the same amount of storage. Another weakness is the number of times that data can be written to it. Data can be read from flash as many times as desired, but after a certain number of "write" operations, "write cycles", it will stop working. Most flash devices are designed for about 100,000 - 1,000,000 write cycles.

EEPROM has the same limitation that flash does: ones made in the 20th century could only survive about 100,000 write cycles, later increased to about a million. It is more expensive than flash, so it is rarely used for storage greater than 128kB. The main difference between EEPROM and flash memory is that most EEPROM devices can erase any byte of memory at any time. Flash memory can only erase an entire chunk, or "sector", of memory at a time. Both EEPROM and flash are subject to the limitation that only bytes in an 'erased' state can be written, which means that if the user wants to change only one byte of flash, the entire sector must be erased and re-written. This means that flash memory can wear out faster than EEPROM. Some flash memory can store hundreds of gigabytes, or even terabytes. Many are in the form of a pen drive.

All content from Kiddle encyclopedia articles (including the article images and facts) can be freely used under Attribution-ShareAlike license, unless stated otherwise. Cite this article:
Flash memory Facts for Kids. Kiddle Encyclopedia.