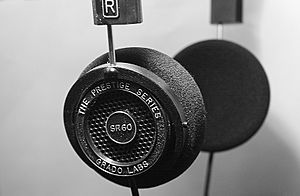 A pair of supra-aural headphones

Headphones are electronic audio devices that people wear over their ears. They let people listen to music on a walkman, MP3 player, mobile phone or computer. Headphones come in many different sizes from big to small. They are also known as earphones, earbuds, stereophones, headsets or even cans. Headphones typically uses small plug for connection.

There is a risk of hearing loss if listening to headphones with a high volume for a long time. 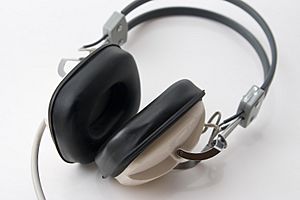 Circumaural headphones have large pads that surround the outer ear.

A pair of supra-aural (on-ear) headphones

Open or closed back

Both circumaural and supra-aural headphones can be further differentiated by the type of earcups:

Open-back headphones have the back of the earcups open. This leaks more sound out of the headphone and also lets more ambient sounds into the headphone, but gives a more natural or speaker-like sound, due to including sounds from the environment.

Semi-open headphones, have a design that can be considered as a compromise between open-back headphones and closed-back headphones. Some believe the term "semi-open" is purely there for marketing purposes. There is no exact definition for the term semi-open headphone. Where the open-back approach has hardly any measure to block sound at the outer side of the diaphragm and the closed-back approach really has a closed chamber at the outer side of the diaphragm, a semi-open headphone can have a chamber to partially block sound while letting some sound through via openings or vents.

Earbuds/earphones sit in the outer ear

Earphones are very small headphones that are fitted directly in the outer ear, facing but not inserted in the ear canal. Earphones are portable and convenient, but many people consider them uncomfortable. They provide hardly any acoustic isolation and leave room for ambient noise to seep in; users may turn up the volume dangerously high to compensate, at the risk of causing hearing loss. On the other hand, they let the user be better aware of their surroundings. Since the early days of the transistor radio, earphones have commonly been bundled with personal music devices. They are sold at times with foam pads for comfort. (The use of the term earbuds, which has been around since at least 1984, did not hit its peak until after 2001, with the success of Apple's MP3 player.) 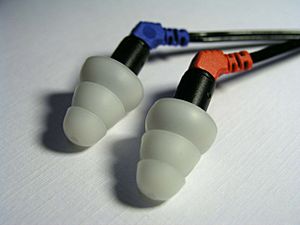 In-ear monitors extend into the ear canal, providing isolation from outside noise.

In-ear headphones, also known as in-ear monitors (IEMs) or canalphones, are small headphones with similar portability to earbuds that are inserted in the ear canal itself. IEMs are higher-quality in-ear headphones and are used by audio engineers and musicians as well as audiophiles.

The outer shells of in-ear headphones are made up of a variety of materials, such as plastic, aluminum, ceramic and other metal alloys. Because in-ear headphones engage the ear canal, they can be prone to sliding out, and they block out much environmental noise. Lack of sound from the environment can be a problem when sound is a necessary cue for safety or other reasons, as when walking, driving, or riding near or in vehicular traffic.

Generic or custom-fitting ear canal plugs are made from silicone rubber, elastomer, or foam. Custom in-ear headphones use castings of the ear canal to create custom-molded plugs that provide added comfort and noise isolation.

This type combines advantages of earbuds and in-ear headphones – depending on the environment and requirements of the user, they provide passive noise reduction for quality mode (conversation or active music listening) or they give control over the sound environment around user in comfort mode (stand by or background voice/music listening). 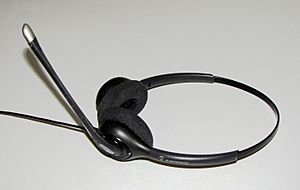 A typical example of a headset used for voice chats

A headset is a headphone combined with a microphone. Headsets provide the equivalent functionality of a telephone handset with hands-free operation. Among applications for headsets, besides telephone use, are aviation, theatre or television studio intercom systems, and console or PC gaming. Headsets are made with either a single-earpiece (mono) or a double-earpiece (mono to both ears or stereo). The microphone arm of headsets is either an external microphone type where the microphone is held in front of the user's mouth, or a voicetube type where the microphone is housed in the earpiece and speech reaches it by means of a hollow tube. 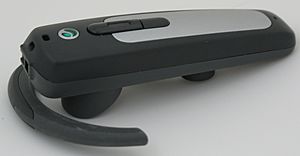 Telephone headsets connect to a fixed-line telephone system. A telephone headset functions by replacing the handset of a telephone. Headsets for standard corded telephones are fitted with a standard 4P4C commonly called an RJ-9 connector. Headsets are also available with 2.5 mm jack sockets for many DECT phones and other applications. Cordless bluetooth headsets are available, and often used with mobile telephones. Headsets are widely used for telephone-intensive jobs, in particular by call centre workers. They are also used by anyone wishing to hold telephone conversations with both hands free.

All content from Kiddle encyclopedia articles (including the article images and facts) can be freely used under Attribution-ShareAlike license, unless stated otherwise. Cite this article:
Headphones Facts for Kids. Kiddle Encyclopedia.