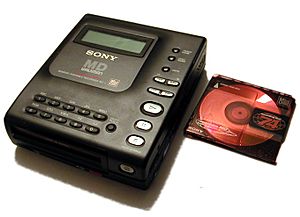 A Sony minidisc player and disc

A MiniDisc (MD) is a small magneto-optical disk. It is used as a replacement for the Audio cassette. It was developed by Sony to store music. Later it was modified, so it can also store data. The music it stores is compressed in some way, like an MP3. Recent Hi-MD models have the option to not compress audio, and offer audio identical to CD-quality.

All content from Kiddle encyclopedia articles (including the article images and facts) can be freely used under Attribution-ShareAlike license, unless stated otherwise. Cite this article:
MiniDisc Facts for Kids. Kiddle Encyclopedia.