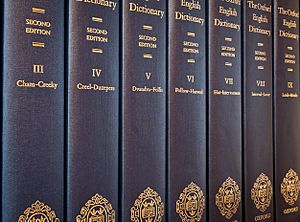 The Oxford English Dictionary (or OED) is a dictionary. It is published by the Oxford University Press in England, and is the largest English dictionary.

It traces the historical development of the English language, and is a resource to writers and scholars. It describes how the language has been used.

Work began on the dictionary in 1857, but it was not until 1884 that it began to be published in parts, under the name of A New English Dictionary on historical principles; founded mainly on the materials collected by the Philological Society. In 1895, the title The Oxford English Dictionary (OED) was first used unofficially on the covers of the series, and in 1928 the full dictionary was republished in ten bound volumes. In 1933, the The Oxford English Dictionary was reprinted as twelve volumes with a one-volume supplement. More supplements came over the years until 1989, when the second edition was published. Since 2000, a third edition of the dictionary has been underway, approximately a third of which is now complete.

The first electronic version of the dictionary was done in 1988. The online version has been available since 2000, and as of April 2014 was receiving over two million hits per month.

The third edition of the dictionary will probably only appear in electronic form; Nigel Portwood, chief executive of Oxford University Press, feels it unlikely that it will ever be printed.

All content from Kiddle encyclopedia articles (including the article images and facts) can be freely used under Attribution-ShareAlike license, unless stated otherwise. Cite this article:
Oxford English Dictionary Facts for Kids. Kiddle Encyclopedia.