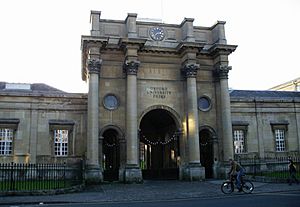 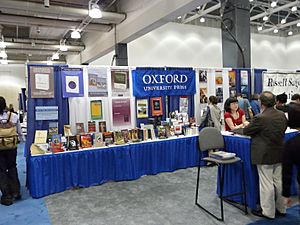 The university started printing books around 1480. It soon grew into a major printer of Bibles, prayer books, and scholarly works. It began what later became the Oxford English Dictionary in the late 19th century. Over the last hundred years, Oxford has grown and now publishes children's books, school text books, music, journals, the World's Classics series, a best-selling range of English Language Teaching texts, as well as its academic and religious titles. It opened its first international office in New York in 1896. Changes caused by computer technology and the need to lower costs, led to the Press contracting out its printing and binding work. The Press's printing house at Oxford was closed in 1989. Its former paper mill at Wolvercote was demolished in 2004.

The Press publishes about 6,000 new titles around the world every year. It is a charitable organization, its profits go to the University of Oxford. The university's aims of excellence in scholarship, research, and education are supported through its publishing activities.

All content from Kiddle encyclopedia articles (including the article images and facts) can be freely used under Attribution-ShareAlike license, unless stated otherwise. Cite this article:
Oxford University Press Facts for Kids. Kiddle Encyclopedia.