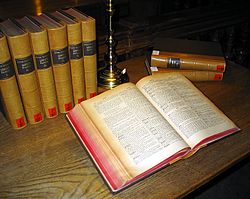 A dictionary is a book which explains the meanings of words or, more precisely, lexemes. The words are arranged in alphabetical order so that they can be found quickly. The word “dictionary” comes from the Latin “dictio” (“saying”).

Dictionaries which translate into foreign languages

There are also dictionaries which translate words into foreign languages. Very often one volume (one book) will translate both ways; for example, half the book might be translating from English to Dutch and the other half from Dutch to English.

When using a dictionary to find out how to say something in another language one has to be careful to choose the right word. A word like “right” has two basic meanings in English: 1) “correct”, and 2) the opposite of “left”. Other languages are not like English: they will have different words for these different meanings. A word like “put” has many meanings. A good dictionary will have a large list of these meanings to help people find the word they want. In many languages, for example, the word “put” will be different according to whether something is being put onto something (e.g. a table) or into something (e.g. a cupboard).

Dictionaries need to be updated frequently because of the way language changes. New words are often brought into a language (e.g. lots of computer terms) or words change their meanings (e.g. “gay” or “cool”). The most famous English Dictionary is the Oxford English Dictionary (or OED). Words are always being added to the OED. They are never taken out even if they are obsolete (not used any more). The OED can be accessed online (with a subscription).

Wikimedia, the same group that runs Wikipedia, has an online dictionary that can be updated by anyone at any time. It is called Wiktionary, and it exists in many languages just like Wikipedia.

All content from Kiddle encyclopedia articles (including the article images and facts) can be freely used under Attribution-ShareAlike license, unless stated otherwise. Cite this article:
Dictionary Facts for Kids. Kiddle Encyclopedia.