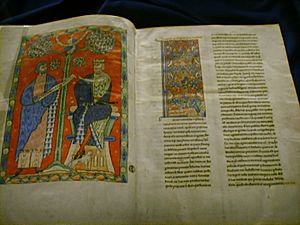 A richly decorated edition of Pliny's Naturalis historia from the 13th century. It was first published AD 77–79. Pliny died in the eruption of Vesuvius, AD 79 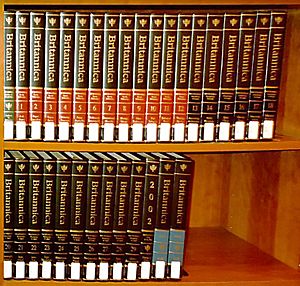 An encyclopedia or encyclopaedia is a collection (usually a book) of information. Some are called "encyclopedic dictionaries".

All encyclopedias were printed, until the late 20th century when some were on CD-ROM and the Internet. 21st century encyclopedias are mostly online by Internet. The largest encyclopedia in the English language is English Wikipedia, which has more than 6 million articles. The second largest is the Encyclopædia Britannica, which is the largest one that is printed. Either kind of encyclopedia can inform us on many different topics.

Book series were used to summarize all knowledge have been published for thousands of years. A famous early one was the Natural History by Pliny the Elder. The name "encyclopedia" is from the 16th century and meant "complete knowledge". The French Encyclopédie of Denis Diderot was the first that had major parts written by many people from all around the world.

After the printing press was invented, dictionaries with long definitions began to be called encyclopedias that were books that has articles or subjects. For example, a dictionary of science, if it included essays or paragraphs, it was thought of as an encyclopedia or knowledgeable book on the subject of science. Some encyclopedias then put essays on more than one subject in alphabetical order instead of grouping them together by subject. The word, encyclopedia, was put in the title of some encyclopedias.

All content from Kiddle encyclopedia articles (including the article images and facts) can be freely used under Attribution-ShareAlike license, unless stated otherwise. Cite this article:
Encyclopedia Facts for Kids. Kiddle Encyclopedia.