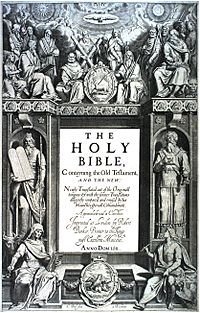 The name "King James" comes from King James I of England, who told the Church of England to begin working on it in 1604. The first book was published in 1611.

Although it is one of the oldest English translations of the Bible, it is still one of the most widely read versions today. A 2014 survey in the United States found that 55% people who read the Bible were using the King James Version. The next most widely-read version was the New International Version at 19%, while other versions were used by less than 10%.

All content from Kiddle encyclopedia articles (including the article images and facts) can be freely used under Attribution-ShareAlike license, unless stated otherwise. Cite this article:
Authorized King James Version Facts for Kids. Kiddle Encyclopedia.