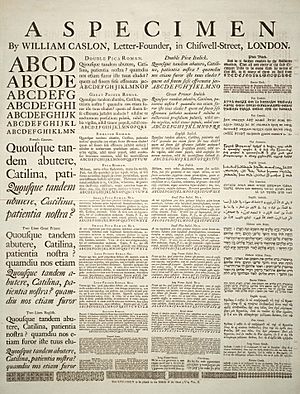 A Specimen, a broadsheet with examples of typefaces and fonts available. Printed by William Caslon, letter founder; from the 1728 Cyclopaedia.

In typography, a typeface is a family of fonts. Every glyph in a typeface shares certain design features. Typefaces have names, such as Times New Roman, Garamond, Baskerville.

Every font of a typeface has specific details (such as size and weight) and is used in a particular way. The reason for having different fonts is to give the designer or printer choices which suit various needs. The most basic of all needs is to have the text legible and readable.

Every typeface is a collection of glyphs, each of which represents an individual letter, number, punctuation mark, or other symbol. There are typefaces tailored for special applications, such as map-making or astrology and mathematics.

A very widely used typeface is Times New Roman. This is a serif typeface commissioned by the British newspaper The Times in 1931. This typeface was later adapted for use in book printing, and again for use as a computer face. There are now many different versions of this typeface.

All content from Kiddle encyclopedia articles (including the article images and facts) can be freely used under Attribution-ShareAlike license, unless stated otherwise. Cite this article:
Typeface Facts for Kids. Kiddle Encyclopedia.