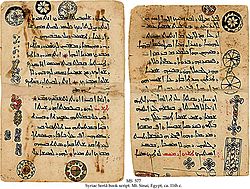 Syriac (ܠܫܢܐ ܣܘܪܝܝܐ leššānā Suryāyā) is an Eastern Aramaic language. It was spoken long ago in the Fertile Crescent. Most of the Aramaic writing that survives from the second to the eighth century AD is Syriac.

All content from Kiddle encyclopedia articles (including the article images and facts) can be freely used under Attribution-ShareAlike license, unless stated otherwise. Cite this article:
Syriac language Facts for Kids. Kiddle Encyclopedia.