James Clerk Maxwell 13 June 1831 – 5 November 1879 was a Scottish scientist in the field of mathematical physics. His most notable achievement was to formulate the classical theory of electromagnetic radiation, bringing together for the first time electricity, magnetism, and light as different manifestations of the same phenomenon. Maxwell's equations for electromagnetism have been called the "second great unification in physics" after the first one realised by Isaac Newton. The unification of light and electrical phenomena led to the prediction of the existence of radio waves.

Maxwell helped develop the Maxwell–Boltzmann distribution, a means of describing aspects of the kinetic theory of gases. He is also known for presenting the first durable colour photograph in 1861 and for his foundational work on analysing the rigidity of rod-and-joint frameworks (trusses) like those in many bridges. 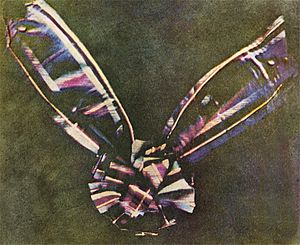 His discoveries helped bring in the era of modern physics, laying the foundation for such fields as special relativity and quantum mechanics. Many physicists regard Maxwell as the 19th-century scientist having the greatest influence on 20th-century physics. His contributions to the science are considered by many to be of the same magnitude as those of Isaac Newton and Albert Einstein.

In the millennium poll – a survey of the 100 most prominent physicists – Maxwell was voted the third greatest physicist of all time, behind only Newton and Einstein. On the centenary of Maxwell's birthday, Einstein described Maxwell's work as the "most profound and the most fruitful that physics has experienced since the time of Newton".

Edinburgh Academy, where Maxwell was schooled

Maxwell grew up in a rich religious family. The 10 year old Maxwell, having been raised in isolation on his father's countryside estate, did not fit in well at school. The first year had been full, obliging him to join the second year with classmates a year his senior. His mannerisms and accent struck the other boys as rustic.

Recognising the boy's potential, Maxwell's mother Frances took responsibility for his early education, which in the Victorian era was largely the job of the woman of the house. At eight he could recite long passages of Milton and the whole of the 119th psalm (176 verses). Indeed, his knowledge of scripture was already detailed; he could give chapter and verse for almost any quotation from the psalms. His mother was taken ill with abdominal cancer and, after an unsuccessful operation, died in December 1839 when he was eight years old. His education was then overseen by his father and his father's sister-in-law Jane, both of whom played pivotal roles in his life. His formal schooling began unsuccessfully under the guidance of a 16 year old hired tutor. Little is known about the young man hired to instruct Maxwell, except that he treated the younger boy harshly, chiding him for being slow and wayward. The tutor was dismissed in November 1841. James' father took him to Robert Davidson's demonstration of electric propulsion and magnetic force on February 12, 1842, an experience with profound implications for the boy. 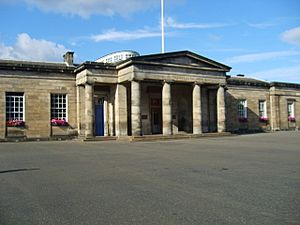 Edinburgh Academy, where Maxwell was educated

Maxwell was sent to the prestigious Edinburgh Academy. He lodged during term times at the house of his aunt Isabella. During this time his passion for drawing was encouraged by his older cousin Jemima. The 10-year-old Maxwell, having been raised in isolation on his father's countryside estate, did not fit in well at school. Arriving on his first day of school wearing a pair of homemade shoes and a tunic, he earned the unkind nickname of "Daftie".

Maxwell was fascinated by geometry at an early age, rediscovering the regular polyhedra before he received any formal instruction. Despite his winning the school's scripture biography prize in his second year, his academic work remained unnoticed until, at the age of 13, he won the school's mathematical medal and first prize for both English and poetry.

Maxwell's interests ranged far beyond the school syllabus and he did not pay particular attention to examination performance. He wrote his first scientific paper at the age of 14. In it he described a mechanical means of drawing mathematical curves with a piece of twine, and the properties of ellipses, Cartesian ovals, and related curves with more than two foci. The work, of 1846, "On the description of oval curves and those having a plurality of foci" was presented to the Royal Society of Edinburgh by James Forbes, a professor of natural philosophy at the University of Edinburgh, because Maxwell was deemed too young to present the work himself. The work was not entirely original, since René Descartes had also examined the properties of such multifocal ellipses in the 17th century, but Maxwell had simplified their construction. 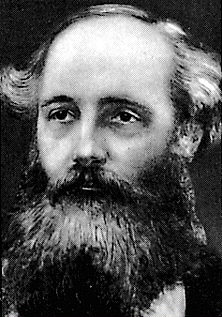 In 1871 he returned to Cambridge to become the first Cavendish Professor of Physics. Maxwell was put in charge of the development of the Cavendish Laboratory, supervising every step in the progress of the building and of the purchase of the collection of apparatus. One of Maxwell's last great contributions to science was the editing of the research of Henry Cavendish, which asked such questions as the density of the Earth and the composition of water.

As a great lover of Scottish poetry, Maxwell memorised poems and wrote his own. The best known is Rigid Body Sings, closely based on "Comin' Through the Rye" by Robert Burns, which he apparently used to sing while accompanying himself on a guitar. A collection of his poems was published by his friend Lewis Campbell in 1882. Descriptions of Maxwell remark upon his remarkable intellectual qualities being matched by social awkwardness.

He was an evangelical Presbyterian and in his later years became an Elder of the Church of Scotland. Maxwell's religious beliefs and related activities have been the focus of a number of papers. 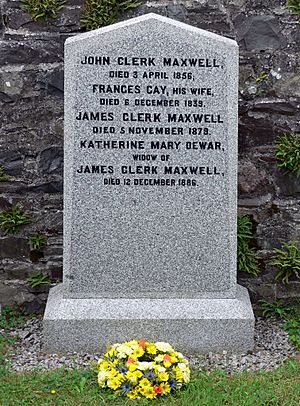 The gravestone at Parton Kirk (Galloway) of James Clerk Maxwell, his parents and his wife

Maxwell died in Cambridge of abdominal cancer on 5 November 1879 at the age of 48. His mother had died at the same age of the same type of cancer. The minister who regularly visited him in his last weeks was astonished at his lucidity and the immense power and scope of his memory.

Maxwell is buried at Parton Kirk, near Castle Douglas in Galloway close to where he grew up. The extended biography The Life of James Clerk Maxwell, by his former schoolfellow and lifelong friend Professor Lewis Campbell, was published in 1882. His collected works were issued in two volumes by the Cambridge University Press in 1890.

His name is honoured in several ways:

All content from Kiddle encyclopedia articles (including the article images and facts) can be freely used under Attribution-ShareAlike license, unless stated otherwise. Cite this article:
James Clerk Maxwell Facts for Kids. Kiddle Encyclopedia.