Rings of Saturn facts for kids

The rings of Saturn

The rings of Saturn are the planetary rings around the planet Saturn, whch can be seen with a small telescope. They consist of many small particles, ranging in size from microscopic to the size of a bus (or bigger) that form clumps that move around Saturn. The particles in the rings are made almost entirely of water ice, with just a small amount of dust and other chemicals. There are some gaps in the rings. The moon Pan causes the gap called the "Encke gap" in Saturn's A ring. The Cassini Division, discovered by Giovanni Domenico Cassini, is a gap between the A ring and the B ring. It is a product of orbital resonance. 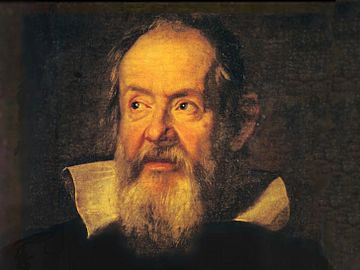 Galileo first observed the rings in 1610.

Galileo Galilei was the first to observe the rings of Saturn in 1610 using his telescope, but was unable to identify them as such. He wrote to the Duke of Tuscany that "The planet Saturn is not alone, but is composed of three, which almost touch one another and never move nor change with respect to one another. They are arranged in a line parallel to the zodiac, and the middle one (Saturn itself) is about three times the size of the lateral ones." He also described the rings as Saturn's "ears". In 1612 the Earth passed through the plane of the rings and they became invisible. Mystified, Galileo remarked "I do not know what to say in a case so surprising, so unlooked for and so novel." He mused, "Has Saturn swallowed his children?" — referring to the myth of the Titan Saturn devouring his offspring to forestall the prophecy of them overthrowing him. He was further confused when the rings again became visible in 1613.

Early astronomers used anagrams as a form of commitment scheme to lay claim to new discoveries before their results were ready for publication. Galileo used smaismrmilmepoetaleumibunenugttauiras for Altissimum planetam tergeminum observavi ("I have observed the most distant planet to have a triple form") for discovering the rings of Saturn. 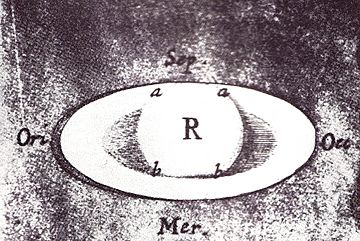 Robert Hooke noted the shadows (a and b) cast by both the globe and the rings on each other in this 1666 drawing of Saturn.

In 1657 Christopher Wren became Professor of Astronomy at Gresham College, London. He had been making observations of the planet Saturn from around 1652 with the aim of explaining its appearance. His hypothesis was written up in De corpore saturni, in which he came close to suggesting the planet had a ring. However Wren was unsure whether the ring was independent of the planet, or physically attached to it. Before Wren's theory was published Christiaan Huygens presented his theory of the rings of Saturn. Immediately Wren recognised this as a better hypothesis than his own and De corpore saturni was never published.

Christiaan Huygens's hypothesis was the first to suggest that Saturn was surrounded by a ring detached from the planet. Using a 50× power refracting telescope that he designed himself, far superior to those available to Galileo, Huygens observed Saturn and in 1656, like Galileo, had published an anagram saying "aaaaaaacccccdeeeeeghiiiiiiillllmmnnnnnnnnnooooppqrrstttttuuuuu". Upon confirming his observations, three years later he revealed it to mean "Annuto cingitur, tenui, plano, nusquam coherente, ad eclipticam inclinato"; that is, "It [Saturn] is surrounded by a thin, flat, ring, nowhere touching, inclined to the ecliptic". Robert Hooke was another early observer of the rings of Saturn, and noted the casting of shadows on the rings.

In 1675, Giovanni Domenico Cassini determined that Saturn's ring was composed of multiple smaller rings with gaps between them; the largest of these gaps was later named the Cassini Division. This division is a 4,800-km-wide region between the A ring and B Ring.

In 1787, Pierre-Simon Laplace proved that a uniform solid ring would be unstable and suggested that the rings were composed of a large number of solid ringlets.

In 1859, James Clerk Maxwell demonstrated that a nonuniform solid ring, solid ringlets or a continuous fluid ring would also not be stable, indicating that the ring must be composed of numerous small particles, all independently orbiting Saturn. Later, Sofia Kovalevskaya also found that Saturn's rings cannot be liquid ring-shaped bodies. Spectroscopic studies of the rings carried out in 1895 by James Keeler of Allegheny Observatory and Aristarkh Belopolsky of Pulkovo Observatory showed Maxwell's analysis was correct.

Four robotic spacecraft have observed Saturn's rings from the vicinity of the planet. Pioneer 11's closest approach to Saturn occurred in September 1979 at a distance of 20,900 km. Pioneer 11 was responsible for the discovery of the F ring. Voyager 1's closest approach occurred in November 1980 at a distance of 64,200 km. A failed photopolarimeter prevented Voyager 1 from observing Saturn's rings at the planned resolution; nevertheless, images from the spacecraft provided unprecedented detail of the ring system and revealed the existence of the G ring. Voyager 2's closest approach occurred in August 1981 at a distance of 41,000 km. Voyager 2's working photopolarimeter allowed it to observe the ring system at higher resolution than Voyager 1, and to thereby discover many previously unseen ringlets. Cassini spacecraft entered into orbit around Saturn in July 2004. Cassini's images of the rings are the most detailed to-date, and are responsible for the discovery of yet more ringlets.

The rings are named alphabetically in the order they were discovered. The main rings are, working outward from the planet, C, B and A, with the Cassini Division, the largest gap, separating Rings B and A. Several fainter rings were discovered more recently. The D Ring is exceedingly faint and closest to the planet. The narrow F Ring is just outside the A Ring. Beyond that are two far fainter rings named G and E. The rings show a tremendous amount of structure on all scales, some related to perturbations by Saturn's moons, but much unexplained.

All content from Kiddle encyclopedia articles (including the article images and facts) can be freely used under Attribution-ShareAlike license, unless stated otherwise. Cite this article:
Rings of Saturn Facts for Kids. Kiddle Encyclopedia.