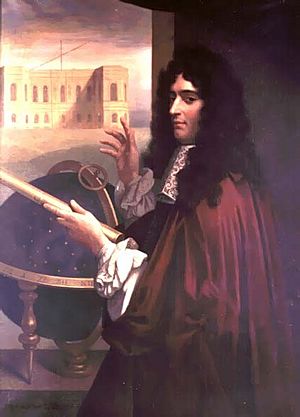 Giovanni Domenico Cassini, also known as Jean-Dominique Cassini, (June 8, 1625 – September 14, 1712) was an Italian-French astronomer, engineer and astrologer. Cassini was born in Perinaldo in the Republic of Genoa (part of Italy).

Cassini, along with Robert Hooke discovered the Great Red Spot on Jupiter in around 1665. He also discovered the four of Saturn's moons, as well as the Cassini Division in Saturn's rings.

All content from Kiddle encyclopedia articles (including the article images and facts) can be freely used under Attribution-ShareAlike license, unless stated otherwise. Cite this article:
Giovanni Domenico Cassini Facts for Kids. Kiddle Encyclopedia.