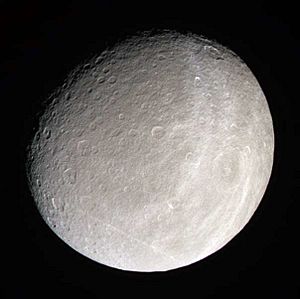 Photo of Rhea taken by the Cassini-Huygens probe

Rhea ( Ancient Greek: Ῥέᾱ) is Saturn's second largest moon. It is made of ice and rock.

Rhea may have a thin ring system with three narrow bands in a disk of solid particles. These would be the first rings seen around a moon. The discovery was announced in the journal Science on March 6, 2008.

All content from Kiddle encyclopedia articles (including the article images and facts) can be freely used under Attribution-ShareAlike license, unless stated otherwise. Cite this article:
Rhea (moon) Facts for Kids. Kiddle Encyclopedia.