Rings of Rhea facts for kids 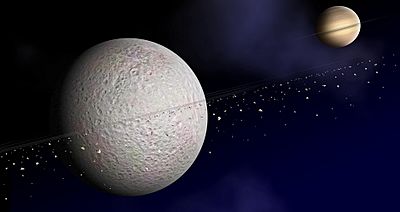 An artist's impression of Rhea's rings

The Saturnian moon Rhea may have a thin ring system with three narrow bands in a disk of solid particles. These would be the first rings seen around a moon. The discovery was announced in the journal Science on March 6 2008.

In November of 2005 the Cassini orbiter found that Saturn's magnetosphere near Rhea did not have energetic electrons. According to the discovery team, this is best explained by assuming they were absorbed by solid material in the form of an equatorial disk having denser rings or arcs, with particles perhaps many decimeters to about a meter in diameter. 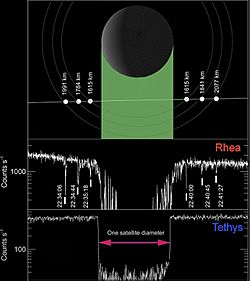 Comparison of MIMI readings at Rhea and Tethys, and possible rings. The plasma wake is more turbulent at Rhea than Tethys, so its shadow is not as clear cut. 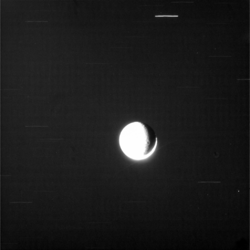 A 100-sec. exposure of a back-lit Rhea failed to find any evidence of rings. If they exist, they are either too tenuous or do not scatter enough light to be detected. This viewing geometry is especially attuned to detecting tiny dust-sized particles, so a ring made entirely of larger debris is still possible. The bright sun-lit crescent is at lower right; the gibbous illumination on the left side is planetshine. 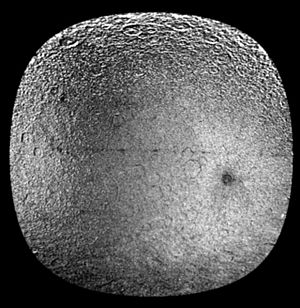 The fresh ice (dark) can be seen spanning the equator in this image comparing infrared and green wavelengths.

Voyager 1 saw an area without as many energetic electrons trapped in Saturn's magnetic field downstream from Rhea in 1980. These measurements, which were never explained, were made at a farther distance than the Cassini data.

On November 26, 2005, Cassini made the one targeted Rhea flyby of its primary mission. It passed within 500 km of Rhea's surface, downstream of Saturn's magnetic field, and saw the resulting plasma wake as it had with other moons, such as Dione and Tethys. In those cases, there was a cutoff of energetic electrons as Cassini crossed into the moons' plasma shadows (the regions where the moons themselves blocked the magnetospheric plasma from reaching Cassini). However, in the case of Rhea, the electron plasma started to drop off at eight times that distance, and decreased gradually until the expected sharp drop off as Cassini entered Rhea's plasma shadow. The extended distance corresponds to Rhea's Hill sphere, the distance of 7.7 times Rhea's radius inside of which orbits are dominated by Rhea's rather than Saturn's gravity. When Cassini emerged from Rhea's plasma shadow, the reverse pattern occurred: A sharp surge in energetic electrons, then a gradual increase out to Rhea's Hill-sphere radius.

These readings are similar to those of Enceladus, where water coming out from its south pole absorbs the electron plasma. However, in the case of Rhea, the absorption pattern is symmetrical.

In addition, the Magnetospheric Imaging Instrument (MIMI) saw that this gentle gradient was punctuated by three sharp drops in plasma flow on each side of the moon, a pattern that was also nearly symmetric.

In August 2007, Cassini passed through Rhea's plasma shadow again, but farther downstream. Its readings were similar to those of Voyager 1.

There are no images or direct sightings of the material thought to be absorbing the plasma, but the likely candidates would be difficult to detect directly. Further sightings are planned for Cassini's first mission extension, with a targeted flyby scheduled for March 2, 2010.

Simulations suggest that solid bodies can stably orbit Rhea near its equatorial plane over astronomical timescales. They may not be stable around Dione and Tethys because those moons are so much closer to Saturn, and therefore have much smaller Hill spheres, or around Titan because of drag from its dense atmosphere.

Many suggestions have been made for the possible origin of rings. An impact could have brought material into orbit; this could have happened as recently as 70 million years ago. A small body could have been disrupted when caught in orbit about Rhea. In either case, the debris would eventually have settled into circular equatorial orbits. Given their long-term orbital stability, however, it is possible that they survive from the formation of Rhea itself.

For different rings to exist, something must separate them. Suggestions include moonlets or clumps of material within the disk, similar to those seen within Saturn's A ring.

All content from Kiddle encyclopedia articles (including the article images and facts) can be freely used under Attribution-ShareAlike license, unless stated otherwise. Cite this article:
Rings of Rhea Facts for Kids. Kiddle Encyclopedia.