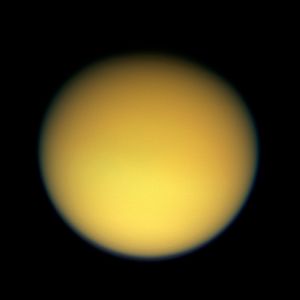 Titan (Ancient Greek: Τῑτάν) is one of Saturn's moons. It was found by Christiaan Huygens on 25 March 1655. Titan is a unique moon because it is the solar system’s only moon to have an atmosphere.

Titan is the largest moon of Saturn and the second largest in the Solar System. Titan is larger than the planet Mercury. Its equatorial diameter (wideness at the equator) is 5,150 km. It orbits 1,221,865 km away from Saturn.

Titan is the only moon known to have an atmosphere and it more thicker than Earth’s. But humans could not breathe it as it's very cold, and also poisonous. The air is made of nitrogen and methane. Titan is the only place in the Solar System, except Earth, that has lakes and much liquid on its surface. But the liquid is methane, not water. 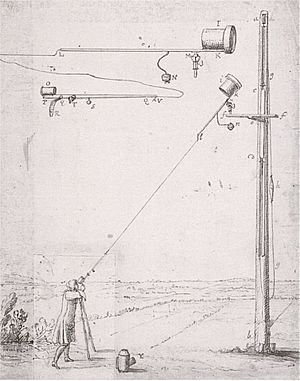 A sketch of one of Christiaan Huygens' telescopes, with which he studied space

Titan was discovered on 25 March 1655 by Christiaan Huygens, an astronomer from the Netherlands. Earlier, in 1610, Galileo Galilei had discovered four of Jupiter's moons. This inspired Huygens: he also wanted to discover new moons. Because Huygens had also improved the telescopes of the time, making them a lot better, he thought he might be able to discover a new moon.

Christiaan and his brother, Constantijn, started to build their own telescopes in 1650. Using the first telescope he ever built, Christiaan Huygens was able to see Titan. At first he called it "Luna Saturni", which means "Saturn's moon" (he did not know there was more than one). Through the years, lots of other moons have been discovered and today the moon is known as "Titan" or as "Saturn VI". The name "Titan", and all the names of Saturn's other moons, are from the Greek legends. 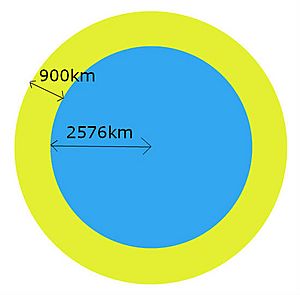 Titan (in blue) has a very thick layer of gas (in yellow) around it, that makes it look a lot bigger than it actually is

Titan is the only moon in the Solar System that has a thick atmosphere (the gases that surround a planet or moon). After the spacecraft Voyager I visited the moon on 12 November 1979, it showed that Titan's surface (the ground level) is hidden under an atmosphere that is 900 km thick. Before this, everyone thought that Titan was the biggest moon in the Solar System. Now we know that it is the second biggest, after Ganymede, one of Jupiter's moons.

Even though it is smaller, Titan is close in size to Ganymede. It is also close in size to the slightly smaller Callisto, another of Jupiter's moons. Not only is Titan a big moon, it is even bigger than the planet Mercury, but it only has half as much mass (it is much lighter). Because Titan does not have a lot of mass, scientist think that Titan is made of matter that is not very heavy, specifically frozen water and ammonia. Some scientists think that there is a lot of liquid water and ammonia underneath the surface, enough to fill an entire ocean. These scientists think that there might be a form of life inside this ocean.

At its centre, Titan has a rocky core that is about 3400 km thick. This core is made up of silicates and metals. The gravity (the force that keeps everything attached to the ground) is a lot weaker than here on earth. If you could jump 1m high on the Earth, you would be able to jump 7m high on Titan.

It takes Titan 15 days and 22 hours to orbit (travel) around Saturn. This is almost the same time it takes Saturn to rotate or spin around its own axis - one full spin. This is known as "synchronous rotation", which means that the same side of Titan is always pointed to Saturn. 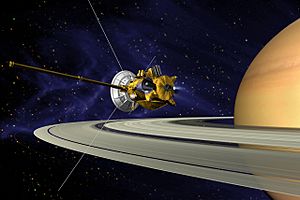 On July 1, 2004, the Cassini-Huygens probe entered into orbit around Saturn. On December 25, 2004, the Huygens probe separated from the Cassini probe and started to move towards Titan. It landed on Titan's surface on January 14, 2005. It landed on a dry surface, but it confirmed that large bodies of liquid exist on the moon. The Cassini probe continued to gain data of Titan and a number of the icy moons. It found evidence that the moon Enceladus had water erupting from its geysers. Cassini also proved in July, 2006 that Titan contained hydrocarbon lakes, located near its north pole. In March, 2007, it discovered a large hydrocarbon lake the size of the Caspian Sea near its north pole. The lake of liquid methane has been named Kraken Mare. In 2009, Nasa showed a photograph showing the sunlight reflecting off the surface of the lake. This was the first ever picture of liquid on another world.

In 2012 researchers at NASA discovered that Titan is giving off a faint glow of light. This is believed to be caused by complex chemical reactions occurring in Titan's atmosphere. This kind of light is called an airglow.

All content from Kiddle encyclopedia articles (including the article images and facts) can be freely used under Attribution-ShareAlike license, unless stated otherwise. Cite this article:
Titan (moon) Facts for Kids. Kiddle Encyclopedia.