Christiaan Huygens, FRS (Latin: Hugenius) (14 April 1629 – 8 July 1695) was a prominent Dutch mathematician and scientist. He is known particularly as an astronomer, physicist, probabilist and horologist.

Huygens was a leading scientist of his time. His work included early telescopic studies of the rings of Saturn and the discovery of its moon Titan, the invention of the pendulum clock and other investigations in timekeeping. He published major studies of mechanics and optics (having been one of the most influential proponents of the wave theory of light), and pioneered work on games of chance. 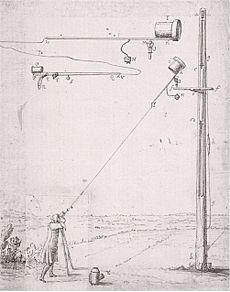 In 1655, Huygens proposed that Saturn was surrounded by a solid ring, "a thin, flat ring, nowhere touching, and inclined to the ecliptic." Using a 50 power refracting telescope that he designed himself, Huygens also discovered the first of Saturn's moons, Titan. In the same year he observed and sketched the Orion Nebula. His drawing, the first such known of the Orion nebula, was published in Systema Saturnium in 1659. Using his modern telescope he succeeded in subdividing the nebula into different stars. The brighter interior now bears the name of the Huygenian region in his honour. He also discovered several interstellar nebulae and some double stars.

In 1659, Huygens was the first to observe a surface feature on another planet, Syrtis Major, a volcanic plain on Mars. He used repeated observations of the movement of this feature over the course of a number of days to estimate the length of day on Mars, which he did quite accurately to 24 1/2 hours. This figure is only a few minutes off of the actual length of the Martian day of 24 hours, 37 minutes.

Huygens moved back to The Hague in 1681 after suffering serious depressive illness. In 1684, he published Astroscopia Compendiaria on his new tubeless aerial telescope. His father died in 1687, and he inherited Hofwijck, which he made his home the following year. 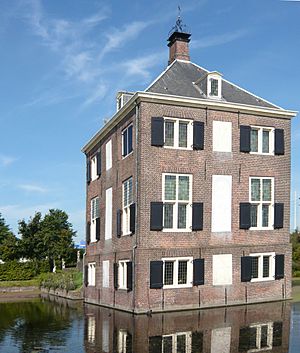 Hofwijck, home to Christiaan Huygens from 1688

On his third visit to England, in 1689, Huygens met Isaac Newton on 12 June. They spoke about Iceland spar, and subsequently corresponded about resisted motion.

Huygens observed the acoustical phenomenon now known as flanging in 1693.

All content from Kiddle encyclopedia articles (including the article images and facts) can be freely used under Attribution-ShareAlike license, unless stated otherwise. Cite this article:
Christiaan Huygens Facts for Kids. Kiddle Encyclopedia.