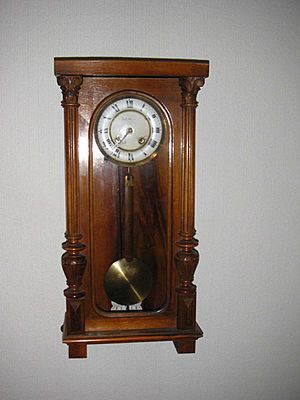 A pendulum clock is a clock that uses a pendulum, a swinging weight, as its timekeeping element. The advantage of a pendulum for timekeeping is that it is a harmonic oscillator: it swings back and forth in a precise time interval dependent on its length, and resists swinging at other rates.

From its invention in 1656 by Christiaan Huygens until the 1930s, the pendulum clock was the world's most precise timekeeper, accounting for its widespread use. Throughout the 18th and 19th centuries pendulum clocks in homes, factories, offices and railroad stations served as primary time standards for scheduling daily life, work shifts, and public transportation, and their greater accuracy allowed the faster pace of life which was necessary for the Industrial Revolution. The home pendulum clock was replaced by cheaper synchronous electric clocks in the 1930s and '40s, and they are now kept mostly for their decorative and antique value.

Pendulum clocks must be stationary to operate; any motion or accelerations will affect the motion of the pendulum, causing inaccuracies, so other mechanisms must be used in portable timepieces. 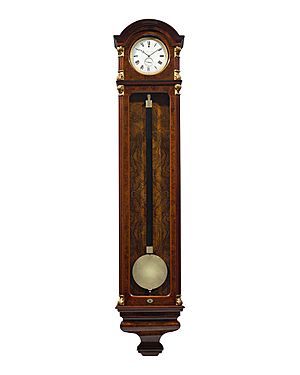 Pendulum clocks were more than simply utilitarian timekeepers; they were status symbols that expressed the wealth and culture of their owners. They evolved in a number of traditional styles, specific to different countries and times as well as their intended use. Case styles somewhat reflect the furniture styles popular during the period. Experts can often pinpoint when an antique clock was made within a few decades by subtle differences in their cases and faces. These are some of the different styles of pendulum clocks:

All content from Kiddle encyclopedia articles (including the article images and facts) can be freely used under Attribution-ShareAlike license, unless stated otherwise. Cite this article:
Pendulum clock Facts for Kids. Kiddle Encyclopedia.