Mechanics is a branch of physics which looks at objects that are moved by forces (including other bodies, or forces of nature).

The discipline has its roots in ancient Greece where Aristotle studied the way bodies behaved when they were thrown through the air (e.g. a stone). However it was Galileo, Kepler and especially Newton who laid the foundations for much of the so-called Newtonian mechanics we know today.

A person working in the discipline is known as a mechanician. 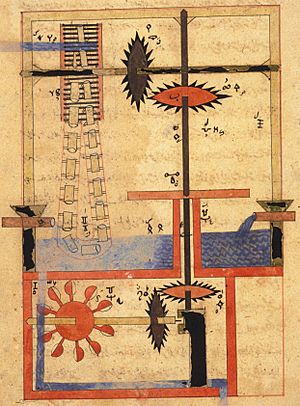 Mechanics is the original discipline of physics, dealing with the macroscopic world that humans perceive. It is therefore a huge body of knowledge about the natural world. Mechanics encompasses the movement of all matter in the universe under the four forces: gravity, the strong and weak interactions, and the electromagnetic interaction.

Some aspects of classical mechanics

The following are categorized as being part of Quantum mechanics:

All content from Kiddle encyclopedia articles (including the article images and facts) can be freely used under Attribution-ShareAlike license, unless stated otherwise. Cite this article:
Mechanics Facts for Kids. Kiddle Encyclopedia.