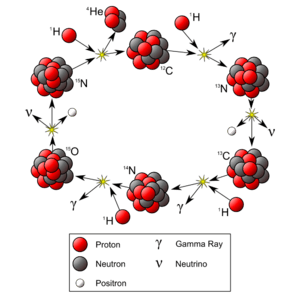 Diagram of the CNO Cycle.

Nuclear physics is the field of physics that studies atomic nuclei and their constituents and interactions. Other forms of nuclear matter are also studied. Nuclear physics should not be confused with atomic physics, which studies the atom as a whole, including its electrons.

Discoveries in nuclear physics have led to applications in many fields. This includes nuclear power, nuclear weapons, nuclear medicine and magnetic resonance imaging, industrial and agricultural isotopes, ion implantation in materials engineering, and radiocarbon dating in geology and archaeology. Such applications are studied in the field of nuclear engineering. 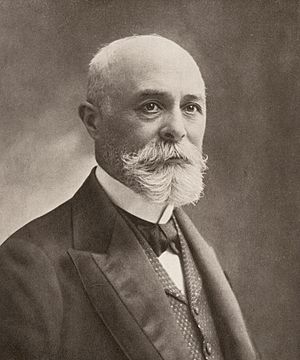 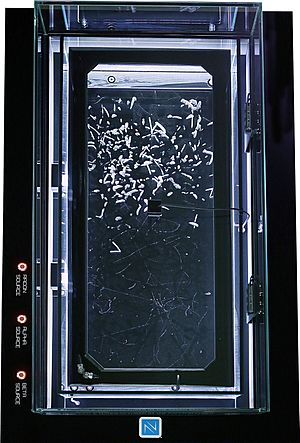 Since 1920s cloud chambers played an important role of particle detectors and eventually lead to the discovery of positron, muon and kaon.

The history of nuclear physics as a discipline distinct from atomic physics starts with the discovery of radioactivity by Henri Becquerel in 1896, while investigating phosphorescence in uranium salts. The discovery of the electron by J. J. Thomson a year later was an indication that the atom had internal structure. At the beginning of the 20th century the accepted model of the atom was J. J. Thomson's "plum pudding" model in which the atom was a positively charged ball with smaller negatively charged electrons embedded inside it.

In the years that followed, radioactivity was extensively investigated, notably by Marie and Pierre Curie as well as by Ernest Rutherford and his collaborators. By the turn of the century physicists had also discovered three types of radiation emanating from atoms, which they named alpha, beta, and gamma radiation. Experiments by Otto Hahn in 1911 and by James Chadwick in 1914 discovered that the beta decay spectrum was continuous rather than discrete. That is, electrons were ejected from the atom with a continuous range of energies, rather than the discrete amounts of energy that were observed in gamma and alpha decays. This was a problem for nuclear physics at the time, because it seemed to indicate that energy was not conserved in these decays.

The 1903 Nobel Prize in Physics was awarded jointly to Becquerel for his discovery and to Marie and Pierre Curie for their subsequent research into radioactivity. Rutherford was awarded the Nobel Prize in Chemistry in 1908 for his "investigations into the disintegration of the elements and the chemistry of radioactive substances".

In 1905 Albert Einstein formulated the idea of mass–energy equivalence. While the work on radioactivity by Becquerel and Marie Curie predates this, an explanation of the source of the energy of radioactivity would have to wait for the discovery that the nucleus itself was composed of smaller constituents, the nucleons.

Atoms are made up of electrons, neutrons, and protons. The protons and neutrons are in the center of the atom, which is called the nucleus. The protons and neutrons are the heaviest part of the atom and make up most of its mass. The electrons move around the nucleus very quickly, making what is called an electron cloud. The electron cloud has a very small mass, but it makes up most of the space of the atom. The electrons have a negative charge, and the protons have a positive charge. Due to the charges in the atom, that is how the atom stays together, by attraction of the electric charges present in the atom.

Atoms have different features that single out one atom from another, and show how each atom can change in different conditions. These properties include atomic number, mass number, atomic mass and weight, and isotopes.

In the early 20th century, scientists had trouble explaining the behavior of atoms using their current knowledge of matter. So to deal with this they made a brand new way to view matter and energy, and they called it quantum theory. Quantum theory explains how matter acts both as a particle and a wave.

Atoms emit radiation when their electrons lose energy and drop down to lower orbitals. The difference in energy between the orbitals determines the wavelength of the given radiation. This radiation can be shown by visible light or shorter wavelengths.

All content from Kiddle encyclopedia articles (including the article images and facts) can be freely used under Attribution-ShareAlike license, unless stated otherwise. Cite this article:
Nuclear physics Facts for Kids. Kiddle Encyclopedia.