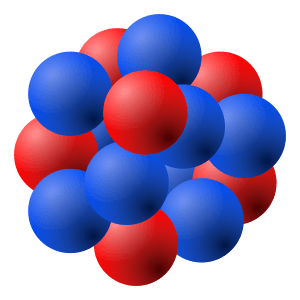 An atomic nucleus, where the protons are red and the neutrons are blue

In physics and chemistry, a nucleon refers to any subatomic particle found in the nucleus of an atom. For instance, protons and neutrons are nucleons, since they are in the nucleus of the atom. Nucleons are made of Quarks.

Nucleons and their properties

Electrons are not nucleons, because they are not in the nucleus of the atom.

The other types of nucleons are antinucleons. These are the antiparticles of the nucleons.

The strong force and nucleons

The fundamental force responsible for holding the nucleons together in the nucleus is called the strong force.

All content from Kiddle encyclopedia articles (including the article images and facts) can be freely used under Attribution-ShareAlike license, unless stated otherwise. Cite this article:
Nucleon Facts for Kids. Kiddle Encyclopedia.