Marie Curie (November 7, 1867 – July 4, 1934) was a Polish physicist, chemist, and feminist. She did research on radioactivity. She was the first woman professor at the University of Paris. She was also the first woman to win a Nobel Prize and the first person to win two Nobel Prizes, one in physics in 1903 and the other in chemistry in 1911. Her Nobel Prize in physics was for her research on uncontrolled radiation, which was discovered by Henri Becquerel.

She died because of too much exposure to radiation in her laboratory because she had no protection against the effects of radiation.

Marie Sklodowska Curie, originally Maria, was born on November 7, 1867, in Warsaw, Poland. She lived there until she was 22. Marie Curie was the fifth child in her family. Marie, whose parents were both teachers, was quite intelligent. She did, however, have a difficult childhood. Her older sister, Zofia, died of typhus in 1876 and her mother died two years later when Marie was ten.

As a young girl, Marie was interested in physics. She was top of her high school class and graduated at fifteen years old. Marie became a teacher so she could earn money to go to school in Paris, France. She also went to an unaccredited college in Poland. Eventually, she left Poland and went to France under the name “Marie" after one of her big sisters gave her the chance. In Paris, she earned higher degrees and did her important scientific work. She founded the Curie Institutes in Paris and Warsaw. 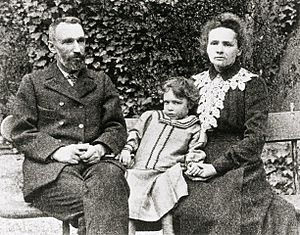 Even though Curie became a French citizen, she never lost her Polish identity. She graduated first in her class in 1893. One year later she earned a master's degree in mathematics. Later, she met her husband, Pierre, at the Municipal School of Industrial Physics and Chemistry. They were married in July 1895 after only one year. They also started to work together on scientific discoveries. Marie and Pierre had their first daughter, Irene, in 1897. Their second daughter, Eve, was born in 1904. Pierre died on April 19, 1906, after he was hit by a horse-drawn wagon. 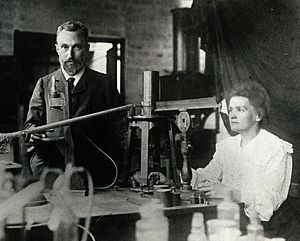 Pierre and Marie Curie in the laboratory

Curie discovered radium, one of the most radioactive and dangerous metals. She shared this discovery with her husband Pierre Curie and Gustave Bemont. The three found radium in 1898. They discovered it when using a uranium ore. The ore gave off a lot of radiation, and the group decided that it was coming from more than uranium. It was then that they found radium in the uranium. Radium is now used for many different things. For example, doctors used to use it to kill cancer cells. Radium was found in paint and watches. Before they knew that radium was dangerous, workers who made radium-containing products developed bone cancer. During World War I, Curie used her research to develop portable x-ray machines in order to help soldiers on the battlefield.

After World War I, Marie started to raise money for a hospital. The hospital raised money for radiation research. She was invited to tour the United States to recommend and speed up her project of studying radiation. She sailed for the United States in 1921. She collected enough money and equipment for a new laboratory. She then started speaking at meetings to raise more money and became a celebrity. She also supported world peace by serving on the council of the League of Nations. 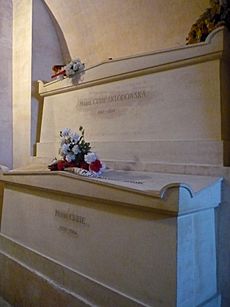 Near the 1920s, Curie and many of her colleagues began to suffer from symptoms of cancer. Curie began to lose her sight, and cataract surgeries did not help. Curie knew that the element (radium) she discovered might have been causing the symptoms, but she did not want to admit it to herself or others.

In the early 1930s, Curie’s health started to get worse quickly. Doctors diagnosed her with pernicious anemia. Pernicious anemia is a blood anemia that happens when someone is exposed to too much radiation. The doctors didn’t tell the public or Curie herself what was going on.

On July 4, 1934, at 66 years old, she died in a sanatorium, a medical facility for long-term illness, in the French Alps. She was then buried next to her husband in Sceaux, France.

Marie Curie was a physicist and chemist best known for her work on radioactivity; however, she also discovered the elements polonium and radium. She was awarded two Nobel Prizes — one in physics which she won jointly with her husband and Henri Becquerel, and another in chemistry — and was the first person to win two Nobel Prizes. She is still one of only four people (along with Linus Pauling, John Bardeen, and Frederick Sanger) to accomplish that feat.

All content from Kiddle encyclopedia articles (including the article images and facts) can be freely used under Attribution-ShareAlike license, unless stated otherwise. Cite this article:
Marie Curie Facts for Kids. Kiddle Encyclopedia.